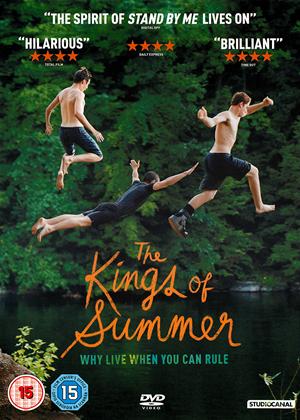 Reviews (4) of The Kings of Summer

I was very disappointed in this movie. I watched it on the same day I watched Sharknado - and Sharknado wins hands down for being way more comic and entertaining!

There are a multitude of problems here.

First, the characters behave like 11 year old boys, going on adventures in the woods, and yet also look about 20. Maybe they're retarded? Perhaps they've been watching too much Wes Anderson drivel and it's addled their adolescent brains.

Second, it is just not funny. The script thinks it's oh-so-clever - but it is utterly contrived, with some comic dialogue lifted from US TV shows - we're right in sit-com land here, and bad sit-com land at that.

Third, it is utterly unbelievable - the plot, the characters, the plot points - everything.

Fourth, no characters is likeable. Not one. We have seen it all before but done miles better: 3 boys include the zany silent one, the pretty central character one, who falls out with the lolloping ginger one with whom he is or was best friends. I wanted them all to starve to death in the woods really - but sadly, we were denied such resolution and catharsis.

Two good things about this film: the music (nice to hear Thin Lizzy) and some of the cinematography (though that linger too long to try and make out this movie is deep and meaningful, when in fact it's just a soap opera TV show aimed at girly kids and the undemanding young adult).

Want to watch a film about boys becoming men? Stand by Me did this SO much better. Lord of the Flies (black and white 1950s version) did too. And more recently, Mud.

This is not a good or particularly entertaining film, though no doubt it appeals to American film school students who love these self-consciously quirky silly movies. The film also seems to think it's shocking and radical - when it SO is not. It's as controversial as chicken popcorn, and quite as monotonous too.

Wes Anderson has a lot to answer for...

It would be easy to dismiss this film as being contrived but then it is a work of fiction.

If like us you can suspend belief, this film should leave you slightly amused with a warm fuzzy feeling inside having been entertained by something more Dawson's Creek than Lord of the Flies. The story has some similarities to Stand By Me, but frankly hurts your head much less.

Not fast-paced or racy, this film is a gentle & slightly funny affair best suited to a Sunday afternoon sofa ride sharing popcorn with someone you love.

Amusingly fake bumfluff aside, we'll probably be seeing some of these young actors again.

Forgive the fake bumfluff if you can ... - The Kings of Summer review by TD

... because, whilst not a showstopper, I reckon this film has a lot to offer on a Saturday night. Nick Robinson (who plays Joe) has an amusingly mobile face that he uses to good effect to express his anguish when enduring his father's masterful, deadpan put-downs. The filming is rather like "Hide your smiling faces" in its use of close-ups of some of the local wildlife, yet in other respects is much lighter and none the worse for that.

Passes the time amiably - The Kings of Summer review by Cliff

This film should have been called "Ferris Bueller - The Prequel". While not as good as Ferris Bueller's Day Off, it has the same themes - smart-ass kid growing up, trouble with dysfunctional parents, having adventures and emerging older and maybe a bit wiser. It has the same mild wittiness and unlikely scenarios. Basically if you liked Ferris, this film will be good to relax to.

The Kings of Summer review by George Hooper - Cinema Paradiso

The first film from director Jordan Vogt-Roberts, Kings of Summer, previously titled Toy’s House after the central character Joe Toy, is an off kilter, imaginative and observant coming of age movie about three boys who decide to leave the rule and oppression of their parents behind and build a house in the woods, living in harmony with nature.

After catching the attention of audiences and viewers at this year’s Sundance Film Festival (though ultimately missing out on the Grand Jury Prize for Drama to Ryan Coogler’s Fruitvale Station) I was quite excited about the prospect of watching a film that, according to most other reviewers, gave a fresh and observant insight into the trials of youth.

And gladly I was not disappointed; with some great, albeit unusual comedy, Kings of Summer was exactly what it had professed to be. With some genuinely beautiful scenes (both emotionally and cinematically) the film takes the desire for independence inherent in every teenage boy to it’s most literal meaning – taking them out of civilisation into a place of their own creation, where they rule rather than obey.

This exploration of freedom, what it means to the boys and how we must all explore it to truly develop, is both the narrative and emotional backbone of the film – though it would be nothing without the excellent performances from the adorable young men at it’s heart. Most worthy of note in this area is ex-Hannah Montana star Moises Arias, who with the Secret Life of Arriety and Despicable Me 2 already under his belt looks absolutely brimming with talent and potential for his future career.

Though some of the more unusual aspects of the film may alienate the more conservative amongst us, there is something genuinely lovely about Kings of Summer for those emotionally open and hopeful enough to endure occasional Wes-Anderson-like artistry of the piece.