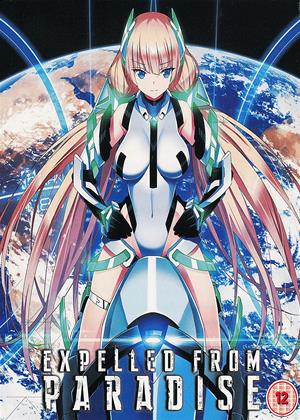 Sign up
Ghost in the Shell: The New Movie

Reviews of Expelled from Paradise

Expelled From Paradise is the type of anime that can best be described as a widget. Executives love widgets because you plug in all the components and you have a simple enough product you can mass produced. This particular film comes from the slick and garish factory machine of anime, where all the animation looks polished, all men are as cool as a cucumber, and all women are airheaded heroines with boobs that seem to have their own gravitational pull to bounce for forcefully. In other words, another forgettable effort.

There’s an interesting enough premise, but it becomes squandered quickly. Humanity has mostly shifted from living on Earth to residing in a future world off the planet. Hackers sometimes break in to make a proclamation to renounce the virtual world assembled by the conglomerate DEVA. In charge of shutting these naysayers of the VR company down is DEVA security officer Angela Balzac. She hides in the disguise of a busty blonde in swimsuits before opening a portal path to the hackers in the obligatory nude form. Not satisfied with losing her target, Angela will be given control of her freshly baked human body to travel to Earth and quell the outside attacker.

But Angela loses all her credibility when the plot throws an unexpected monkey wrench into the works. Angela has never resided in a human body before and has to have her’s grown, but an error in the process only ages her to sixteen. It’s the oddest excuse to turn the heroine into a ditzy high school girl and the script goes the extra mile to make her dumb. How is it that this intelligent officer knew so much about tech and hadn’t studied enough about Earth to know dirt is not editable? She can easily pilot a robot that she uses to savage the attacking wildlife, but must have skipped that lesson on human food.

Helping out Angela on her mission is frontier cowboy Dingo, the cool guitar-playing wanderer to Angela’s analytical and whiny nature. He regales her on their journey to the hacker with all the wonders of Earth including sleep and rock music. This would sound like an amusing premise for an adventure considering the potential chemistry, but it’s squandered on this most sleep-inducing of pacing. By the time the duo find the hacker, who turns out to be a robot with a surprise twist, the film is already bloated with so much dry exposition and far-too-standard anime interactions that what mecha action present in the climax does little to entertain.

Just think of how much could have been done with such a story. Angela could have a misconception of the world she has only studied from a space station, but most of her misinformation seems to be having no information at all. She’s entirely oblivious to the health of humans, despite carrying a medical kit in her backpack. What’s the point of her even having that if she doesn’t know how to treat a common cold? Dingo could have some fun with Angela’s lack of knowledge, but he seems to busy playing the teacher of a first-time Earther that he doesn’t have much time to be that kind of guy. And, wow, is this dialogue dull, so focused on the bland plot of tracking hackers it forgets to have any fun along the way.

Expelled From Paradise is at least decent to look at, if not garish in its designs at times. Rendered with 3D toon-shader technology that makes three-dimensional characters look more like traditional hand-drawn animation, there are some satisfying action scenes with a pleasing techno score behind them. But as with the script, I kept waiting for it to wow me with more than just explosions and robots, always retreating back into its boring and flat shots of exposition and dry interactions. Couldn’t Dingo at least comment on how ineffective it is for Angela to be wearing such a skimpy uniform with high-heel shoes? I guess not; wouldn’t want to distract from this forgettable sci-fi plot that never ventures far enough out of its comfort zone to be anything more than a cliche affair.