2.1 of 5 from 45 ratings
Unknown
Not released
Play trailer
Gallery 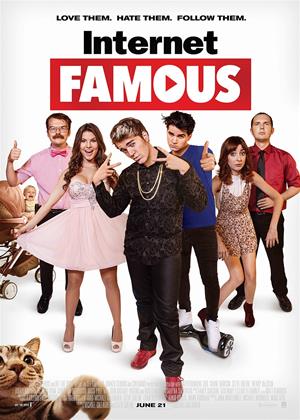 Not released
My Uncle Rafael

Not released
Smosh: The Movie

Not released
Teacher of the Year

Sign up
Blue Mountain State: The Rise of Thadland

Sign up
A Cinderella Story: Once Upon a Song

Not released
It's a Disaster

Not released
Not Cool

Sign up
Harold and Kumar Escape from Guantanamo Bay

What has YouTube done to the entertainment of our culture? Has it broadened the scope of creators and creativity by providing a free platform for any and all to broadcast their vision to the world? Or has it made our consumption of content more fast-food like with simplistic viewings of prank videos and egotisical vloggers? I would like to think that this platform is both a blessing and a curse that can be either depending on how it is used. But Internet Famous makes a strong case against.

Yes, I’m aware that this is supposed to be a mockumentary of the crowd that is referred to as YouTube celebrities in the style of Christopher Guest. But this is far from the satirical cleverness of Waiting for Guffman or Best in Show, even if the cast list boasts Best in Show’s John Michael Higgins. True, the movie does attempt to showcase the simplistic and uninteresting nature of most YouTube celebrities that are one-trick-ponies. But to what end? There’s nothing all that unique to these characters as they lack any emotions they’re holding back or traits that could lead to funny moments.

The premise is a lame bit of a reality show where YouTube celebrities compete for a chance to have their own TV program. But what good will come of it? How many viral stars do you know that are still around as entertaining celebrities? The likes of Afro Ninja, Fred and The Annoying Orange were all flashes in the pan that burnt up quickly. As one character states, YouTube culture is a blip of popularity. It’s not 15 minutes of fame - it’s 15 seconds. And there’s just not enough in those 15 seconds to warrant an amusing satire.

The various talent assembled are nothing all that notable. There’s a music video satirist who begs his fans to continue to fund his ritzy lifestyle. An embarrassed woman who appeared drunk in a viral video desperately competes as she cannot land any proper jobs. An amateur filmmaker desires to make features, but is really only known for his cat videos in which more viewers demand the cat more than himself. A big-breasted woman creates videos about nothing of interest, but does so in revealing outfits.

But I think the most depressing of these characters is a father who has achieved viral success by constantly scaring his baby girl with pranks where he fakes his own death or wears a scary mask. Maybe I’m just a prude of a parent, but I did not find this funny one bit. Many of the scenes where this father shoots these videos features his daughter crying and screaming for her dad to be okay. Why would this go viral? More importantly, why would someone want to evoke humor from this? The dad eventually completes his arc by learning that it’s not cool to scare your children with pranks that involve being abducted or shot, but it comes after he realizes that his daughter now has constant nightmares.

Most of the attempts at humor just come off as lame. When the cat video director attempts to sign in at the hotel, his name is only listed under his cat’s name. When he is later addressing a crowd or talking with people, all they care about is his cat, believing the cat itself would enter the competition. The big-breasted competitor has taken on young interns who act as writers, but really just want to stare at her boobs; not much else funny about this extended bit. And the once drunk girl’s woeful tale of viral videos ruining her life is not even the least bit funny, coming off more tragic than it should.

I really don’t want to come off in this review as some old grump complaining about how viral video is bringing down the standards of our culture, but Internet Famous isn’t giving me much to work with here. The satire is juvenile at best, the characters are all uninteresting and every attempt at humor from such a concept falls flat. It’s an ugly mirror that wants you to laugh at its bitterness, but doesn’t offer up any cleverness to warrant a giggle. This is disgusting runoff of a YouTube culture that isn’t even worthy of parody. I don’t want to watch a father constantly scare his baby girl to death, either as a YouTube video or in a feature film. And I don’t know why any sane human being would want to either.