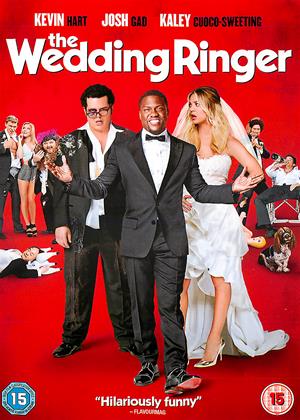 Reviews (1) of The Wedding Ringer

Too American - The Wedding Ringer review by Harry

We couldn't get into this film. The general plot was known, but there was so many expressions we couldn't understand. And the speed with which the actors spoke their lines left us completely way behind.

Let’s take a moment to acknowledge one crucial fact about this buddy comedy. Josh Gad and Kevin Hart work well together as a comic pair. You can see their spirit and energy flow from the screen. Dig deep through this disjointed script of overused comedy cliches and you can see a real comedic duo at play. Unfortunately, their antics are mostly hushed out by writer/director Jeremy Garelick (The Break-Up) who aims for nothing short of a comedy that hits all the expected and tired bits in addition to a few that I could swear were dead.

The old joke book is dusted off early with the old looking-around-the-room-to-form-a-fake-name. Friendless Doug Harris (Josh Gad) finds himself put on the spot by his distant fiance about who will be his best man for the wedding. Scrambling in the bathroom medicine cabinet, he whips up the preposterous name of Bic Mitchum from his brand name razors and deodorant. Of course, his wife buys both the story and name for this fictional friend, only late in the picture realizing it’s fake when seeing both products in the medicine cabinet (that they’ve both been using for weeks).

With no true friends to rely on, Doug needs to hire someone to play the part of Bic. Enter Jimmy Callahan (Kevin Hart), a shameless specializer of being a professional paid wedding crasher. He takes on the job of making lesser people with darker pasts and low self-esteem to appear larger than life by association. Yes, he even does funerals when makes a rather dull and unlikable Jewish man appear incredibly generous and inspiring in death thanks to Jimmy's words. Just seeing him try to work funerals would be a far greater film, but weddings just make for a higher chance of hi-jinks. And when Doug hires him to fill out his entire groomsmen roster, it means a larger cast of characters can get in on the farce as well.

Any average moviegoer can see the kinks in the plot that was built to comically fall apart. While Jimmy does put some amount of work into maintaining identities for Doug’s faux circle of friends, he doesn’t plan for many obvious contigents. Jimmy stays local which means there is a severely high chance of him being recognized as a liar not just in public, but also at large weddings (which does happen). This is supposed to be a man who has professionally been doing this shtick for years and has never once planned an out for being caught? Put on the spot, he whips up quick and insane solutions such as kidnapping the priest to avoid being recognized for his true identity.

Jimmy seems to have a handle on what he is doing, but can’t even keep his story straight once he first meets Doug’s family. He establishes his origins as being from North Dakota since his reasoning is that nobody knows anybody from North Dakota. Sure enough, the father in law is from North Dakota and asks where he is from. After revealing more of the story on how Doug and Jimmy know each other, they sputter and stammer as it becomes more confusing to keep track of. How do you offset an awkward conversation? With an awkward bit of physical comedy. Just accidentally set grandma on fire for that dash of shock and slapstick.

In between a series of sigh-worthy gimmicks, including a muddy football game with the in-laws set to sports staple “You’re The Best Around”, there are some true moments of chemistry for Gad and Hart. During a test run at a party to feel out Gad’s ability to dance, the two perform an intricate and hilariously straight routine on the dance floor. They waltz and crappulate with a strange grace that is relentlessly amusing for how serious they take this practice. Some of their back-and-forth, while still quite limited by the script, is just as funny for being a mismatched pair who become best buddies. It’s rather tragic considering how the film briefly tries to touch on real friendship, but can only muster wrecking-ball subtlety when given such little time to develop.

The Wedding Ringer features a comedy couple that is too good for its own ceremony. Josh Gad and Kevin Hart need to leave this tiresome script at the altar and run away to a better movie for both of them. They shouldn’t settle for the first script that comes along which barely cracks even half of their potential. There were some real laughs to be had in this picture to be sure, but not nearly as many as this pair is truly capable of delivering. They can both do far better than a film where they’re kicking old people in the guts and having dogs bite their genitals. This type of film should be beneath these two and I hope it is seen as such for the eventuality of them working together in the future on something that doesn’t involved an ill-conceived sequel to this bland bit of raunch.