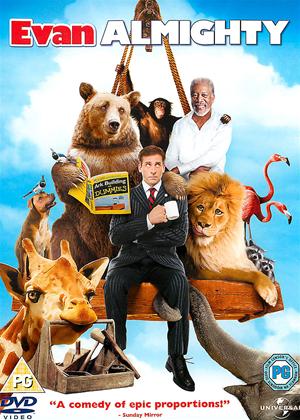 what is a rarity? A sequel that is much much better than the Jim Carey original. The first is a typical Carey film, fun but full of semi mask like antics as he discovers he has powers and can perform miracles.

This film takes a more subtle approach, detailing the problems faced by a guy and his family moving into a new neighbourhood.

But he starts seeing weird signs and messages and loads of wood starts getting delivered too his home. He then finds he has an 'animal' magnetism, quite literally!

I don't want to spoil things but he soon becomes obsessed with building a full blown copy of Noah's ark and being a senator that's going to cause mayhem!

Starring the lead from the 40 year old virgin, it's a more subtle, refined performance than Jim Carey's and is a movie well worth watching. Go on give it a go!

The deleted scenes are worth a look and the bloopers are very entertaining.