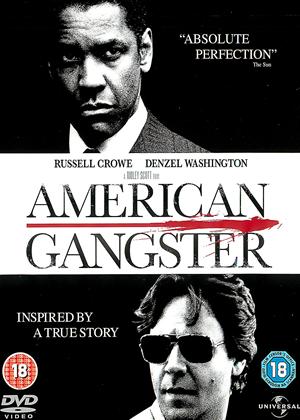 Not like previous gangster movies, but worth a watch! - American Gangster review by CP Customer

I liked Russell Crowe’s role in the movie, who played a straight cop (with a little extra weight!) who had his morals and values against the corrupt majority of the police force. Although Denzel played the “bad guy” gangster, he did have likeability about his character and the bad guys pointed more towards the dodgy cops!!

I suppose by the title, I was expecting a typical gangster movie. Being a fan of Godfather, Scarface, I was a little disappointed with the film but is still worth watching, don’t get me wrong!! Compared to the gangster epics, I did not find this film as violent or deep as I thought it would be – although it still had the “family mob” aspect of gangsters.

I found that the film dragged on a little – often thinking “Is it not finishing yet!” (but maybe that was due to me selecting the “Extended Version” on the menu.). I would advise that you select the “Theatrical Version” on the DVD menu as it may cut it down to it’s best bits.

Worth a watch, but probably wouldn’t buy the DVD

you get a choice of the cinema versions or extended directors cut,'''at the begining that it doesnt work on some dvd players,;;stick to the normall version as I tried to watch exteneded and sticks a lot,poor idea,

good film a bit to long, but well made directed and acted,a bit violent but your not watching tellytubbys!quite differant than you expected,and from ridley scott a well paced and presented version without flashy photo effects,

Ridley Scott proves yet again that he is a masterful director. This was a stunning film spread over 2 decades which shows the rise and fall of black gangster Frank Lucas. From small beginnings, he gradually builds an empire based on cutting out the middle man and directly sourcing drugs from Asia. Denzil handles the role extremely well, as does Russell Crowe as the straight as a die cop who heads up a special investigation team. I watched the extended version and never felt that the film dragged. The difference between this and a lot of other gangster films is that the main character, Frank Lucas is actually quite likable, in spite of the drugs and violence!

Ridley Scott's epic gangster film is one of the best crime films since The Godfather (1972). It's a rise and fall story as well as a police procedural and loosely based on true events it's marked by two top performances from Denzel Washington and Russell Crowe. It's really a simple story and oft told in crime cinema of a ruthless criminal and the dedicated detective who hunts him down. In Scott's hands it's a richly detailed and a visual delight recreating New York in the early 1970s, essentially a character study, interspersed with violence and an array of really interesting personalities and performances. Washington plays Frank Lucas a black criminal who rises through the ranks of the New York heroin trade by buying direct from South East Asia, using corrupt soldiers in Vietnam to ship it to the US and selling at a higher purity to push out his rivals including the mafia. His nemesis is Richie (Crowe), a detective who hates the endemic corruption in the police who, using good old fashioned street techniques, brings him down. Along the way he has to deal with his bent colleagues portrayed here by Josh Brolin. The cast is impeccable and includes Chitwel Ejiofor, John Hawkes, Idris Elba and Cuba Gooding Jr. This is a big story, superbly well told and whilst it plays fast and loose with the actual events it is a riveting crime drama of greed, corruption, racism and dedication and deserves to be in the ranks of the great gangster films of the last 25 years.