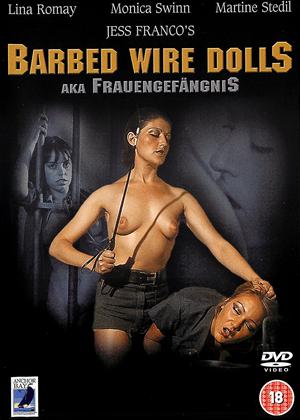 Synopsis:
After killing her father who had attempted to rape her, Maria da Guerra is sentenced to prison for life. The wardress is a sadistic lesbian without mercy or humanity. Upon her arrival Maria is taken to a special section for mentally disturbed prisoners where torture and rape are part of the day-to-day reality. One day the Regional Governor arrives, claiming to have received a letter from one of the prisoners describing incredible events in the prison. The writer of the letter was clearly unaware that the Governor is also part of the conspiracy. Carlos Costa, a male nurse pretending to be the prison doctor Moore, falls in love with Maria.
After seducing him, Maria kills him with a pair of scissors and escapes with her friends Bertha and the disturbed Rosario, hoping to find safety in the Governor's house, unaware that he will not help them...
Actors:
Lina Romay, Paul Muller, Monica Swinn, Roger Darton, Ronald Weiss, Martine Stedil, Eric Falk, Peggy Markoff, Nathalie Mann, Denis Torre, Raymond Hardy, Beni Cardoso, Frieda Altstadt, Madeleine Ammann, Nathalie Chape, Jesús Franco, Lilliane Stollberger
Directors:
Jesús Franco
Writers:
Jesús Franco, Connie Grau
Aka:
Frauengefängnis
Studio:
Anchor Bay
Genres:
Drama, Horror, Thrillers
Countries:
Switzerland, Drama, Horror, Thrillers

Sign up
I Still Know What You Did Last Summer

Sign up
Bring It On: Fight to the Finish

bad acting, plus direction what more am I forced to say crap and more crap

Uncle Jess Franco’s itchy camera zooms away from an austere, guarded prison building to the sound of a young woman, naked and chained as it turns out, screaming for mercy. This will be one of a collection of Franco/Erwin C. Dietrich collaboration then, a ‘women in prison’ drama.

Lucky Lina Romay (as Maria da Guerra) is a new inmate. “The crime you are guilty of could not have been committed by a normal woman,” she is told, and is soon sent by duplicitous ‘doctor’ Carlos Costa (Paul Muller) for electro-shock therapy. The torture is suitably graphic and convincingly played, as are subsequent indignities, both sexual and ‘therapeutic’. Mostly, this is conducted accompanied by the inappropriately cheery jazz score from regular composers Daniel White and Walter Baumgartner. And while I’m listing familiar elements from other ‘WIP’ films, yes, the locations are excellent and the director makes very good use of them.

On one hand, this is a series of scenes featuring pretty, dubbed women in various sexual situations. On the other, if you find it possible to look beyond that – and it’s not always easy – you have a thin tale of Maria, a mentally delicate girl, being abused in a vile manner in a film only Franco could make. The ‘doctor’ played by Muller has been dubbed with a very camp voice, which makes his sexual manipulation of Maria unlikely. After sharing with us all the dubious sight of his hirsute back whilst rutting with Soledad Miranda in 1970’s ‘Eugenie De Sade’, here similar treats are in store for Lina Romay – lucky Paul Muller! By this time, Maria’s so forlorn, she can barely smoke a cigarette.

Maria’s crime is told in flashback, and in the telling, provides one of the strangest moments in a Franco film – which says a lot. A slow motion scene of incest and violence between her and daddy (Jess Franco) – although it is acted in slow-motion, but filmed at normal speed – demonstrates Maria’s current predicament. This is followed up with some almost penetrative shots of various inmates’ genitalia (one with inserted cigarette) and a close-up of a dead mouse in Maria’s breakfast. Whilst the story is an overall mish-mash and is leanly spread out, there is no denying the set-pieces are guaranteed to disturb, one way or another.

Romay is excellent, as is Martine Stedil as Bertha and Beni Cardoso as deranged Rosaria. Monica Swinn plays the monocle-wearing, trouser-less chief wardress. She’s very good, even given the usual wall of dubbing that compromises any performance. Why does she do what she does? Because she can. Just why she reserves special treatment for poor Maria, well …