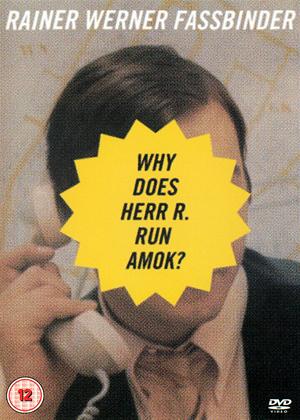 Michael Fengler and Rainer Werner Fassbinder’s study of the mild mannered, slightly clumsy, well-meaning Herr R (Kurt Raab) and his slowly growing intolerance of the perceived mundanities of his life runs not unlike a film by the UK’s Mike Leigh. Every uncomfortable moment is there for all to see, and yet most of the characters are oblivious to it.

Whichever scene you may be watching, you can be fairly assured that Herr Raab, gentle and genial as he is, will be on the periphery. Rarely spoken to, often spoken of. Loved by his wife, but in a way that an owner loves a big dopey dog – and Raab is only occasionally moved to break away from the stereotype he has had thrust upon him.

When he is not around, he is spoken of as a commodity, as a cash-cow whose promotion at work is an obsession for his wife, and used as a basis for social one-up-man-ship masquerading as gossip amongst neighbourly coffee mornings. Cigarettes accompany everything. We have people politely enjoying themselves or bickering as a formality.

When Raab finally gets drunk enough to make a speech at the workplace, he clears the room in what is surely the film’s most excruciating scene. Although an early episode in a record store, where Raab’s enquiries concerning a particular track is made especially awkward by the protracted adolescent rudeness of the two giggling assistants, runs a close second.

SPOILER: Of course, watching amiable but boring people being perfectly amiable but boring, could result subsequent boredom from the audience. The superficial, banal chit-chat just begins to shift from ‘fly-on-the-wall studies of human behaviour’ to ‘overwhelmingly infuriating’ - when quite without warning, Herr Raab clubs his neighbour, his wife and his son to death. He does this without a show of any emotion, much like majority of his day-to-day life. When his subsequent fate is revealed to an office full of his co-workers who barely acknowledge his existence anyway, the film sharply ends.

Once seen, never forgotten, this is a fine observation on the endless embracing of the normal. Pressures to succeed, to conform, to literally keep up with the Joneses, delivered so casually on a day-to-day basis with no possible way out shows very well the smallness of existence. Of course, Raab’s compliance doesn’t help his situation, but there’s no denying this is a production that stays with you long after the credits have rolled.