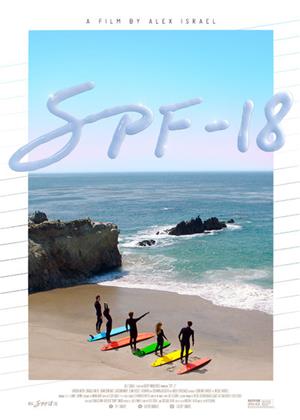 How, just how, did this lacking and lame excuse of a coming-of-age dramedy escape the 1980s? Caught somewhere between a brainless beach picture and a hokey romance about adolescence, it’s a mess of a movie that never quite finds something sincere, serene or even sentimental in its meandering amid sand. Even the cameo twist of the picture can’t save it from the aimlessness.

Penny Cooper is portrayed as a conflicted teenager. She has spent her life trying to be astute enough on movies so that she can be a little closer to her mother who is an actor. She has just graduated high school and is greatly looking forward to the college saga of her life. Meanwhile, the teenage Johnny is struggling to get through life without a father and it isn’t easy. Maybe the two can connect and fall in love in the way a film such as this is designed to force them together.

SPF-18 just doesn’t even try to aim for the chemistry required to makes us root for the two leads to leap into each other’s arms by the end of the picture. All the 80s tropes are trotted out not for a satirical poking of them but more to adhere to them. It’s as though the director took note of the rom-coms of the 1980s, asked why we don’t have those kinda movies anymore, and then decided to literally make one without any concern for WHY we don’t make these movies anymore. And it becomes clear quite quick as the standard scenes of crafting a dress and making out on the beach after a fun party.

But such a film is woefully bereft of being relatable, stuck in its own stuffy box of how fun it is to live in Malibu. Because, honestly, if Penny and Johnny don’t connect, what is the loss? These are people who mingle about a beach with so much wealth it’s not out of the ordinary for them to see Pamela Anderson or Keanu Reeves on the beach, which literally happens in the film. It’s not even treated as some keen insertion of celebrity adornment or making them have an impact on the story or even for the characters to gush about. It’s just a mild smile of a “oh, that’s Pamela” or “yo, look, Keanu.”

SPF-18 is just dead in the water as its brain becomes too burned in its own sun as though it were a waspy Icarus. Whereas Icarus flew too close to the sun, this film passes out on its trip and merely phones in a flight. I honestly can’t see anyone digging this picture unless you really miss those mindless teen 80s comedies or need a not-so-friendly reminder why we don’t have those films around as much.