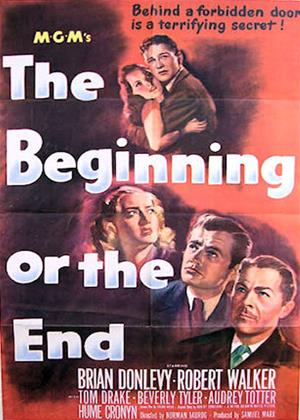 Synopsis:
In 1945, physicist and atomic scientist Dr. J. Robert Oppenheimer (Hume Cronyn) praises the discovery of atomic energy, but also warns of its dangers. American scientists such as Matt Cochran (Tom Drake), working under the guidance of Dr. Enrico Fermi (Joseph Calleia) and Dr. Marré (Victor Francen), have split the atom, and essentially beaten the Germans in the race to create an atomic bomb. With the assistance of Albert Einstein (Ludwig Stössel), they inform President Franklin D. Roosevelt (Godfrey Tearle) that a monumental discovery has been made. In 1941, with the United States at war, Roosevelt authorizes up to two billion dollars for the Manhattan Project to develop an atomic bomb.
In December 1942, at the University of Chicago, under the watchful eyes of observers such as Colonel Jeff Nixon (Robert Walker) and international experts, scientists create the first chain reaction, under a stadium at the campus. Nixon is assigned to General Leslie Groves (Brian Donlevy), who is placed in charge of the project. Groves has to bring together the scientific, industrial and defense communities to build the atomic bomb. In 1945, following the death of Roosevelt, the new president, Harry S. Truman (Art Baker), continues to support the atomic project, now moved to Los Alamos, New Mexico. When refined uranium-235 is obtained, the first atomic bomb is built and tested successfully in the New Mexico desert. Facing stiff resistance in the Pacific War, Truman orders the use of the atomic bomb against Japan in July 1945. Cochran and Nixon are assigned to accompany the crew transporting the bomb to Tinian. While assembling the bomb, the scientist comes into contact with radioactive material and dies. The following day, on August 6, 1945, the Enola Gay, a Boeing B-29 Superfortress bomber, drops an atomic bomb on Hiroshima. After the mission, Nixon returns home to break the news of her husband's death to Cochran's wife.
Actors:
Brian Donlevy, Robert Walker, Tom Drake, Beverly Tyler, Audrey Totter, Hume Cronyn, Hurd Hatfield, Joseph Calleia, Godfrey Tearle, Victor Francen, Richard Haydn, Jonathan Hale, John Litel, Henry O'Neill, Warner Anderson, Barry Nelson, Art Baker, Ludwig Stössel, John Hamilton, Frank Ferguson
Directors:
Norman Taurog
Writers:
Robert Considine, Frank Wead
Genres:
Action & Adventure, Documentary, Drama

Rent other films like The Beginning or the End

Sign up
I Love Lucy: The Very Best Of

Reviews of The Beginning or the End