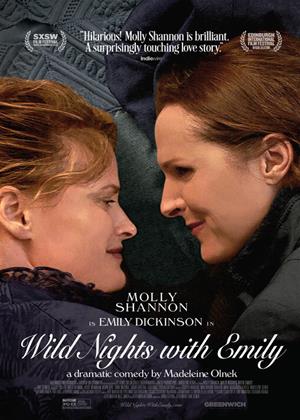 Reviews of Wild Nights with Emily

Going by my high school English class and the more recent biopic A Quiet Passion, my perceptions of Emily Dickinson was that of a dignified recluse. But that’s not the full story. Thanks to recently discovered poems and letters of Dickinson, there’s a much different version of Emily we didn’t know about. According to her many undiscovered writings, Emily was deeply in love with her best friend Susan from childhood. And the more that director Madeleine Olnek dug deeper into Emily’s hidden past, so astounding were these discoveries that she believed there was a tongue-in-cheek comedy to be had.

Just looking over Emily’s steamy world concealed behind closed doors and stashed-away writings, it’d be perfect for an episode of Drunk History. Molly Shannon perfectly plays Emily as a woman who struggles to put on a dignified face amid concealing her sexuality and frustrations with society. She wants to be in a relationship with her friend Susan (Susan Ziegler) but she knows that a lesbian coupling would not be proper or acceptable for the era. She wants to be a famous writer but the male publishers and poets looming over her are condescendingly commentary of all her works. She just gives a defeated smile and carries on.

But behind closed doors, she’s much different. Curtains drawn and nobody home, Emily and Susan break out into a passionate love affair, deeply kissing and ravishing each other. It seems a little over-the-top but consider the setting. Emily’s brother Austin had married Susan and she moved into a house right next door. How could she not race over to Susan’s when the husband and kids are gone and go for a sexual fling? And if their love was that concealed, why wouldn’t they go at it like animals?

Here’s the interesting thing about the film though; it never feels to go too far over the edge of absurdity. Olnek’s movie embraces a lot of its comedy through the very absurd nature of how Emily was initially perceived. It’d be so easy to careen over that edge of Drunk History hysterics to have Emily say something sassy in private but, no, the dignity seems somewhat maintained and relatable. That being said, Emily’s underminers are portrayed with great goofiness as buffoonish clowns either stuck in their ways or too old to be communicated with.

Wild Nights With Emily is the perfect kind of comedy for the person not that interested in poetry. The perceptions of Emily Dickinson being a stuffy writer of a dreary generation are shattered and made all the more serviceable with a plot that seems straight out of a reality show or soap opera. And Olnek’s presentation tries to present this awe-struck story with as much stiff lip as Emily could muster when taking writing advice from a man who could hardly hear her. It dares you to laugh and I have to admit I caved.