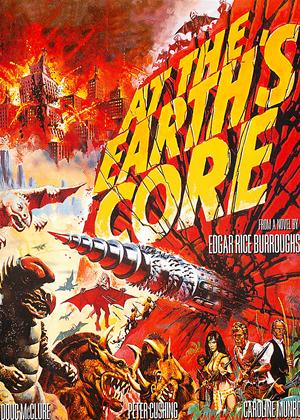 Reviews (1) of At the Earth's Core

Spoilers follow ... - At the Earth's Core review by NP

Many years ago, films like this were released during school summer holidays, a number of them starring Doug McClure. Here he plays, not unusually, a wise-cracking, cigar chomping devil-may-care physical leading man (trip financier David Innes) to Peter Cushing’s bumbling Doctor Abner Perry, or ‘Doc.’ Perry could be a close relative of Cushing’s Doctor Who, a part he played about ten years earlier in two Dalek-bothered films. It isn’t my favourite Cushing formula – he is such a talented, sensitive performer, but this smacks of ‘putting on a show for the kids’. Very enthusiastic, but perhaps could be dialled down a tad. Sweaty, sultry Dia is played by the incomparable Caroline Munro, a character who gives Innes a reason to come over all unnecessary.

The film is colourful and psychedelic and boasts a great showcase for ‘back projection’ to provide its special effects: actors in restrictive monster costumes lumber about in garish studio-bound foliage, and this image, enlarged, is played in the background of the leading actors reacting. This isn’t just reserved for the monsters – the spectacle of The Iron Mole, which transports our two heroes beneath the crust of the planet is achieved in a similar way.

The monsters themselves are a good example of their kind: you don’t know whether you want to run away from them or give them a hug. They rarely convince, but once you are used to the style of their depiction, they appear to get more impressive. An interesting line in telepathic communication helps bring many of them to life. Director Kevin Connor’s camera looms in on their open eyes to indicate mind control, snapping shut to suddenly curtail it. The monsters all have a uniform look about them, with extra detail signifying different species and rank – the ones who seem to be in control of everything certainly look the most impressive, swathed in dry ice and gurgling inhuman, guttural sounds.

Difficult not to enjoy, this was produced by Amicus (their final production) and based on the story by Edgar Rice Burroughs, it boasts an impressive, trippy soundtrack by Mike Vickers. The film performed well at the box office, proving an understandable fondness for this kind of monster adventure.