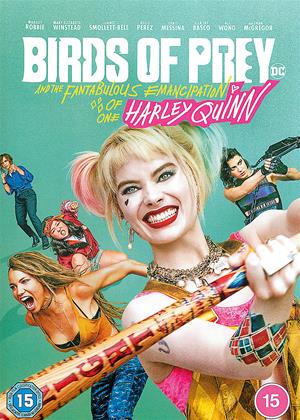 Reviews (1) of Birds of Prey

so disappointed! - Birds of Prey review by sw

I was really looking forward to watching this as her character is suicide squad was so cool.

but i swear her voice or the way she talks is different in it. the whole film just seems weak.

after half the movie i started forwarding bit by bit trying to get to the end quicker.

i would try and be more helpful on why its bad but i honesty cant pin point anything because i didnt like any of it.

wish id listen to all the bad reviews on imbd that id read.

This is perhaps the most liberating of DC Comics movies in recent in how it sheds the past mistakes of DCEU. No longer bound by the constraints of blockbuster orders or lukewarm PG-13 theatrics, Margot Robbie finally gets a film to shine at her best as Harley Quinn. On a larger level, Warner Bros has learned from their mistakes of Suicide Squad and can now look back and laugh on their mistakes with a film that finally found the comic formula that works. Embracing an R-rated for Harley proves to be exactly the cure for DCEU’s blockbuster blues and gives the comic book franchise a neon wake up call.

Similar to the Harley Quinn animated series, Birds of Prey picks up with Robbie in the role of Harley post-Joker. Having taken enough of Joker’s abuse over the years, she finally makes the tough call to go out on her own and cut the clown out of her life. At the same time, WB is also cutting the Jared Leto Joker out of their franchise, highlighting how the studio intends to move forward with what worked and what did not. Harley worked, Joker did not. And so Harley has shed the clown crime prince in a grand act of exploding the ACE Chemical plant where the two had formed their bond over toxic waste.

Once Harley does this, however, she’s not only struggling financially but also to survive in a Gotham City crawling with criminals. Knowing now that Harley no longer has the Joker to defend her, everyone who had a beef with her now comes after her, forcing Harley to constantly be on the run. Told in punk style typography and doodles, we soon learn that she has made a lot of enemies. Chief among those most offended is Black Mask (Ewan McGreggor), a very eccentric and cruel owner of a nightclub. He entertains her antics for a while before threatening to cut off her face. And he’ll do it, as referenced in flashbacks.

Harley is ultimately thrown into a heist plot where’s she forced to steal a diamond for Black Mask to save her life. It sounds standard for a fast-paced action picture but its a simple enough premise to allow for a lot of girly grit to spew forth with great fun. Several characters are thrown into the mix, some of them getting more star time than others. There’s Black Canary, a singer in Mask’s nightclub who has conflicting and torn views on criminals and police, placing her in a unique spot as a woman who may or may not become a hero. Cassandra Cain is a troubled kid who has resorted to a life of pickpocketing, making her a key player in the heist for her ability to swipe and hide. Renee Montoya is a veteran cop that struggles to take down Black Mask when working in a very contentious work environment. And then there’s Huntress, struggling to make her superhero name known which everyone gets wrong.

This ensemble cast is great and they even has some brilliant chemistry but they have to fight for their time on screen. Mary Elizabeth Winstead is perhaps the most adorable of straight women for taking herself so seriously when nobody else does and yet she is shoved so far into the third act as a surprise that we don’t get to appreciate more of her. When she does show up, however, the fight scenes are brilliantly staged and ridiculously violent. There’s a freeing nature to such a picture that never fears to dabble in the immoral and crude, where nightclub parties are over the top and battles in the streets are exceptionally bloody and brutal. This film just knows how to have fun.

Birds of Prey is perhaps at its best in how it poses the central Harley Quinn. She is the protagonist in this giddy Guy Ritchie style picture but also still a villain. Not some misunderstood woman who turned evil or some bad girl who learns to become a good guy. She is an anti-hero, the lesser of Gotham’s evil while still being a part of the criminal lifestyle. And the film lavishes in this craziness to such a degree that even when the film takes on some off tonal shifts, it never loses sight of its character and its atmosphere.