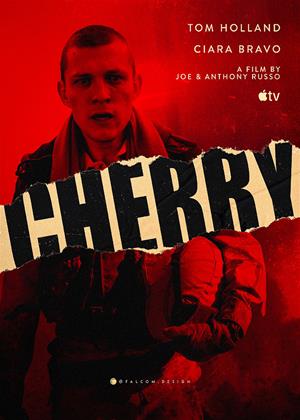 The Russo brothers are certainly trying to branch out since their success with Avengers. Cherry is by far one of their more ambitious films past the forgettable crime thrillers they’ve been churning out post-Marvel. It’s also a tall order for trying to be both a coming-of-age tale, Americana criticism, military drama, and drug-use tragedy. The results are so messy and chaotic that even when the film feels as though it’s trying to say something powerful, it always feels lost in the fog.

Tom Holland plays the lead character of Cherry, loosely based on the author Nico Walker. He grows up figuring he doesn’t have much of a future in a rundown town, finding only momentary joy in the comfort of drugs. Though he has found a relationship with the lovely Emily (Ciara Bravo) but doesn’t know if he can do much for their future. Eventually, Cherry enlists in the Army as a medic, soon thrown into the mid-2000s war of the Middle East. What started as the story of a young man struggling to find himself now turns into a stylistic story of military training, complete with typography and dynamic montages.

Throughout his service, Cherry continues to narrate his story talking openly about everything, sometimes even breaking the fourth wall. His talks range anywhere from the profound tragedy of smelling your dead co-workers on the battlefield to the crude of talking about his girlfriend while he masturbates in a portapotty. We spend a lot of time in this setting but don’t get to know much of anyone besides Cherry. It sounds like he doesn’t much care to associate with anyone either, given that his co-workers are jerks and his instructors are full of BS. Sometimes it’s implied and sometimes it’s his words.

The third act is when the film finally finds a firmer footing but also feels bereft of elaboration. Cherry returns to Emily and they buy a house together but PTSD strains their relationship. He finds life harder and harder to manage, being shunned by his government and the rest of society when it comes to getting a job or getting a loan. The most he can manage to acquire is a prescription for oxycodone. He, unfortunately, becomes addicted and so does Emily as they swirl down further into a black hole of debt and deteriorating health.

Cherry is a move that’s uncomfortably passive with such material. It’s staged almost like a slick Martin Scorcese epic where a character goes through a long and stumbling road that leads him down the wrong path. But the film never settles on a consistent tone, each chapter feeling as though it’s a completely different movie. The military arc appears spiffy and indicative of most by-the-numbers war dramas. The arc that follows, however, treats the material with a standard and washed-out story of opioid addiction. Both subjects of commenting on the dehumanization of war and the horrifying lifestyle of being addicted to drugs just feels far too par for the course with material that shouldn’t feel so sweeping of an Americana story.

This film has some potential and maybe some good will come from bringing up such elements of the past that still linger in the present. But on the whole, Cherry is just a mess of a movie that spends far more time trying to figure out how to frame Holland as a conflicted character than ever giving him a greater focus on a grander thematic element.