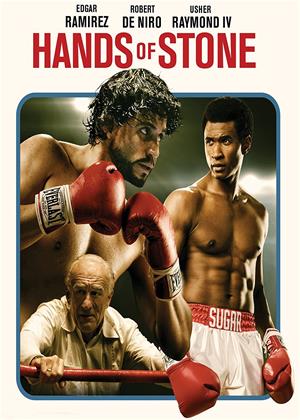 Reviews of Hands of Stone

How do you make a true boxing story into an entertaining movie? Hands of Stone attempts to portray the rise and fall and rise again of boxer Roberto Duran with a bit of spice. Every boxing scene is played up with a high amount of editing and tension-ramping sound. Every bitter feud turns into a drama-filled shouting match with overlapping dialogue. Every sex scene is played out with lots of nudity and embracing. It’s a sad case of a movie trying far too hard to amp up an otherwise interesting sports story.

Roberto Duran is at least expertly played by Édgar Ramírez with the right amount of charm, distress and cockiness. Learning most of his moves from the chaotic streets of Panama, he’s able to fend for himself and become a powerhouse of a boxer in the ring. But he’s not quite strong enough to be a world champion as he requires the skills of legendary coach Ray Arcel, played with wisdom and crass by Robert De Niro in a more-than-fitting role. Duran warms up to Arcel quickly as they share comical jabs and work well together on proven boxing strategy. But, of course, Duran lets his glory go to his head and he has to stumble before he can rise again.

As much as I enjoyed the chemistry between Ramirez and De Niro, it feels lacking in how the story wants to pursue so many lesser scenes. The scene where Ramirez argues with his wife amid sex about his national pride is nowhere near as interesting as the scene where De Niro teaches him how to brush off distractions of soldiers. The scene where De Niro attempts to connect with his illegitimate daughter doesn’t hold as much drama as when De Niro and Ramirez squabble over psychological strategy in the ring. So many scenes appear out of place with different styles and focusing on the less interesting aspects that don’t involve Duran and Arcel. Did there really need to be a sex scene between Sugar Ray Leonard and his wife? We barely even get to know them, much less be invested in their passion.

For the boxing scenes, the quintessential moments that make or break a sports movie, director Jonathan Jakubowicz plays it far too safe. Every single match for Duran is played up with lots of quick cuts, added sound effects to make the punches sound bigger and plenty of shots of his fans cheering him on from the slums of Panama. It’s the true sign of a filmmaker who doesn’t quite have a style down. I watched in amazement as he stages Arcel’s bitter past with the mafia in the form of black-and-white visuals with an a-typical 50s appearance. Jakubowicz doesn’t have the eye for how he wants his movie to be; just ideas he’s lifted from other movies. It wouldn’t surprise me if there were a plethora of producer notes floating around for this production.

Hands of Stone has its moments whenever Ramirez and De Niro share the screen, but these scenes are few and far between as the movie takes in too much and doesn’t know what to do with it. Arcel’s daughter must be mentioned, but not much is done with her. Duran’s father pops up when he has reached a peak of fame, but nothing notable comes from a confrontation scene where there should be more. So much of this story is out of place and splinters off into unneeded sections as if Jakubowicz was more concerned about staying true to the story than making a great movie out of its material. If this is the case, it’s rather ironic that he wanted to stray from making a phony Hollywood depiction of a true story when he has in fact done just that. The career of Roberto Duran is a unique one. So unique that it deserves more than this standard movie treatment.