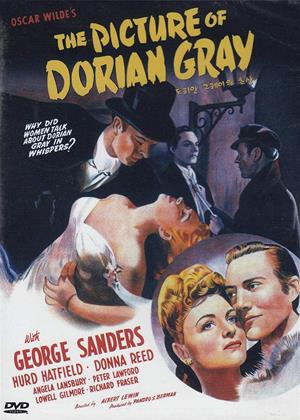 Synopsis:
In 1886, in the Victorian London, the corrupt Lord Henry Wotton meets the pure Dorian Gray posing for talented painter Basil Hallward. Basil paints Dorian's portrait and gives the beautiful painting and an Egyptian sculpture of a cat to him while Henry corrupts his mind and soul telling that Dorian should seek pleasure in life. Dorian wishes that his portrait could age instead of him. Dorian goes to a side show in the Two Turtles in the poor neighborhood of London and he falls in love with the singer Sibyl Vane. Dorian decides to get married with her and tells to Lord Henry that convinces him to test the honor of Sibyl.
Dorian Gray leaves Sibyl and travels abroad and when he returns to London, Lord Henry tells him that Sibyl committed suicide for love. Along the years, Dorian's friends age while he is still the same, but his picture discloses his evilness and corruptive life. Can he still have salvation or is his soul trapped in the doomed painting?
Actors:
George Sanders, Hurd Hatfield, Donna Reed, Angela Lansbury, Peter Lawford, Lowell Gilmore, Richard Fraser, Douglas Walton, Morton Lowry, Miles Mander, Lydia Bilbrook, Mary Forbes, Robert Greig, Moyna MacGill, Billy Bevan
Directors:
Albert Lewin
Writers:
Albert Lewin, Oscar Wilde
Others:
Cedric Gibbons, Harry Stradling, Hugh Hunt, Hans Peters, Edwin B. Willis, John Bonar
Studio:
Warner
Genres:
Classics, Drama, Horror, Sci-Fi & Fantasy, Thrillers
Awards:

Not released
The Red Danube

Unavailable
The Bad and the Beautiful

Not released
The Story of Three Loves

Not released
The Merry Widow

Not released
Too Young to Kiss

Not released
The Americanization of Emily

Not released
The Yearling

Reviews (1) of Picture of Dorian Gray

MGM period horror with excellent production values and photography. This is a faithful adaptation of Oscar Wilde's novel. Dorian (Hurd Hatfield) is gifted his most solemn desire, that he may stay young and beautiful in order to live a hedonistic life while all the inevitable signs of debauchery are displayed on the enchanted painting he keeps hidden from public view.

Hatfield is a cypher, little more than mask, which is appropriate for a story which is all about surfaces. Most of the Wildean epigrams are delivered by George Sanders. He does pretty well with dialogue that is easier to read than to speak. Angela Lansbury as the Cockney music hall entertainer, who Gray destroys, and Donna Reed, as the rich beauty he aspires to, are both archetypes, but perfect for rich gothic melodrama.

There is a splendid recreation of Victorian London, and I particularly like the expressionistic look of the dens of vice where Gray goes slumming. There's a scene in an opium dive/brothel towards the end of the film which is so engorged with louche decadence that it steals the film.

For my money this is the best screen Oscar Wilde adaptation. It is heavy with period atmosphere but director Lewin doesn't let it slow down his narrative. And it's a great Faustian story, which in spite of its typically provocative Wildean irony, is a moral tale. It is b&w but the introduction of colour, when we first see the portrait and later, when it has absorbed all of Dorian's wickedness, is a striking touch.