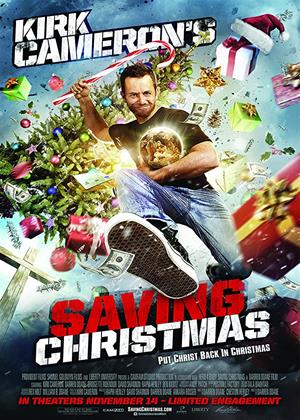 Synopsis:
This Christmas, have your family join with Kirk Cameron’s family and dive headfirst into all the joy, dancing, celebration, feasting, imagination, and traditions that glorify the true “reason for the season”. Take in the splendor; take in the majesty; take in the story. Take it all in … and then take back Christmas!
Actors:
Bridgette Cameron, Kirk Cameron, Darren Doane, Raphi Henly, Ben Kientz
Directors:
Darren Doane
Voiced By:
Not Available
Writers:
Darren Doane, Cheston Hervey
Genres:
Children & Family, Comedy

Kirk Cameron loves Christmas. No, he REALLY loves Christmas. He adores the holiday to such an absurd degree - his house plastered with wall-to-wall decorations and cups bursting with hot chocolate - that he is willing to defend its joy and significance by any means. But from whom? Atheists? Liberal media? Democrats? Nay, for it is the slightly-skeptical Christian that acts as our Grinch for this picture - a soft target for a soft movie with soft logic.

Cameron plays himself as the perfect Christmas guy at his family’s Christmas party. Nobody loves hot chocolate more than this guy to the point where I began to watch his teeth to see if they turned brown. He has an answer for everything as the narrator who cozily assures the audience that this is a movie which won’t challenge anything all that grand about Christmas. The only person at the Christmas party who isn’t enjoying himself is Cameron’s brother-in-law Christian. Kirk can’t have one sour grape at his gathering and decides to join Christian in the car he’s sequestered himself in out in the driveway. Cameron asks what’s wrong and Christian unloads his troubling thoughts about how the commercialization of Christmas has tarnished the religious context. And, for the rest of the movie, Cameron sits in the car attempting to prove Christian wrong with his contextual relations that are written to seem ironclad.

Is this the whole movie with Cameron in a car preaching to the converted? Yes, but he makes sure to coat his preachings with decent-production B-roll to illustrate the birth of Christ and the origins of Santa Claus. The majority of these sequences make the movie appear as some religious documentary for the Discovery Channel which honestly wouldn’t surprise me if that was Cameron’s intent. Despite some decent cinematography for these sequences on a small budget, they come as laughable segments the way Cameron attempts to rationalize Christmas trees as more to do with the Garden of Eden than paganism.

There are a handful of scenes that take place out of the car, but they’re so horrendous you’ll be begging to get back in the vehicle for more of Cameron’s goofy stories. Walking around the Christmas party is a black character that speaks with the fastest tongue and lightest of subject attention that he may as well be a cartoon character. There’s a conspiracy theorist as well that babbles on about the war on Christmas so manically it’s hard to tell if he’s supposed to be a nut or the supposed voice of fearful reason. Even the other characters are unsure of what to make of him.

Such a concept for a movie is clearly not enough to be feature length. Thus, to pad out the runtime, there’s an extended dance sequence that’s about as unimpressive as any family dance party. But that’s not long enough so we have to have Christmas dinner B-roll footage as Cameron gushes more about the holiday season. And even THAT isn’t enough, so we must also endure what appears to be all the bloopers and outtakes from the production. Even still, the movie is only about 70 minutes long. Why didn’t he throw in some family home movies and Christian music videos to pad it out further?

Christian defense movies were all the rage in 2014 with such noticeable box-office successes as God’s Not Dead and Heaven is For Real. But it’s rather odd that Cameron’s Saving Christmas fits into a strange niche of Christploitation - one that seems more interested in defending Christmas than Christianity. It’s also a bit of an endurance test to see how long you can go with Cameron’s silly logic in relating Christmas decorations to the Bible. The capper is when he compares Christmas presents to towns of Jerusalem. Oddly missing is the religious relation of hot chocolate - the blood of Christ, perhaps?