3.4 of 5 from 45 ratings
Unknown
Sign up
Play trailer
Gallery 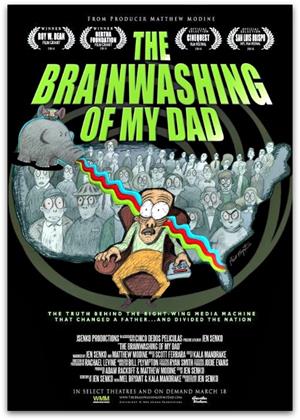 Synopsis:
Right-wing cable news and "conservative" talk radio attract older Americans like graying moths to an angry flame. But why would someone who was either apolitical or a Democrat in younger days become addicted to conservative talk shows in their twilight years? Filmmaker Jen Senko wondered how her WWII veteran and Kennedy Democrat father had been transformed into a Fox News fanatic, suddenly and inexplicably railing against blacks, gays, and poor people. Using her dad as an entertaining example, Senko pulls back the curtain to expose the tools and tricks of the wizards behind the right-wing media revolution.
And in discovering what happened to him, Senko reveals the all-too-chilling bigger picture of what’s happening behind the scenes to influence our national discourse.
Actors:
Jeff Cohen, Thom Hartmann
Directors:
Jennifer Senko
Narrated By:
Matthew Modine
Writers:
Melodie Bryant, Fiore Derosa
Genres:
Documentary

Rent other films like The Brainwashing of My Dad

Reviews of The Brainwashing of My Dad

The Brainwashing of My Dad review by Mark McPherson - Cinema Paradiso

We all know that one family member when the holidays come they can’t wait to explode on the clan with their politics. In the age of 24-hour news hysteria and no shortage of nutty right-wingers polluting radio waves and podcasts with fear and paranoia, it’s no surprise to find a few within your flock that like to pose watercooler conversations of how immigrants are raping us all and that the Democrats plan to arrest you for misgendering. Director Jen Senko has one of those raging dads and decided to take aim at his influences and see if it was possible to change him from a cold-hearted Republican back to the Democrat he once was. An interesting experiment, even if it doesn’t care to answer the larger question of news influences in general.

Jen’s father is a typical case. He used to favor the Democrats, though he wasn’t a very political person. And then around the time that Fox News started to become a powerful media player, he made a sudden transformation into the stereotypical Republican fanatic that despised Democrats and believed that Obama was the devil. Curious as to how this change in character came about, Jen takes a dive into what may have influenced him. She delves into how Roger Ailes worked with the GOP for an overtaking of the media, the 1971 Powell Memo that tied business influencing institutions of public opinion, and the 1987 dismantling of the Fairness Doctrine among other aspects. Much listening of Fox News and conservative talk radio was done to gain a perspective of what breeds the Republican fanatic.

While Jen’s documentary shines a unique light on the influence of media, it mostly relegates itself to the GOP influence and a questioning of fairness in the media but to a limited to level. Her film isn’t the first to craft this expose and most of this is just review for those not bound by the conservative news dogma. But there feels like a missing edge to make this film more than just a piece on the Democratic deprogramming of the right-wing fanatics. Yes, the whole “fair and balanced” tagline is a lie but it's a lie where the very line itself is a faulty one, a fool’s goal to attain. I have to wonder if Jen is aware of how this aspect plays a hefty part in the political pull of the media while she swings the pendulum of her dad’s political leanings.

Perhaps it’s a little more than that. Maybe Jen just wants her pop to quit with the rhetoric at the dinner table and that flying up his old liberal flag is the only way to keep the dinner table conversations less awkward. But in the molding of trying to decipher the source of her father’s frothing with hate, the grander goal of trying to target and expose conservative media comes off far too standard, nearly as filler for the more interesting subject of the swaying family opinions. Maybe she felt this dissection was necessary to avoid the piece becoming a mere propaganda piece for the Democratic party, the same way conservative Christians often spin soapy tales of turning to the light amid Christianity paranoia. This further developed aspect could’ve made for an interesting film but it would’ve also brought a colder light to how one father’s opinion seems to be only be bound by what the media spouts at him and little else.

A bigger film would take a harsher lens at the massive can of worm in the fairness of media and the influence it wields with a chilling tone to the political struggle. This is not that film. This is merely Jen Senko’s attempt of a home movie to make her dad a little less furious at them dang liberals come Thanksgiving time. And in that aspect, it’s an interesting experiment, if not a very profound documentary.