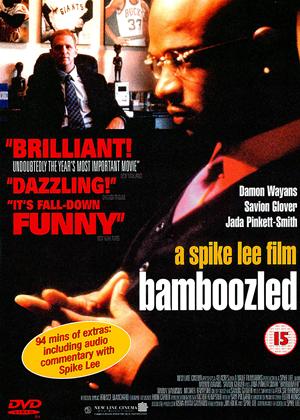 Back in 2012, Sight and Sound magazine published a chart of the 100 greatest films, as selected by critics, which led to a debate about how we decide which films pass the threshold of “greatness”. Is it the most influential films? The ones that best capture the spirit of the age? The ones with the most consistent artistic vision?

But how then do we judge films that are bold but messy, visionary but rough around the edges? The ones that you’ll still be thinking about days after, even though they are not technically brilliant and contain elements that don’t quite work?

“Bamboozled” is such a film. Never drily intellectual, it nevertheless requires engagement rather than mere passive reception from its audience. Possibly the most outrageous comedy about race since “Blazing Saddles”, it is also a powerful satire on political correctness, cultural appropriation, the entertainment industry, and more.

Some background. From the 1830's up until about 1910, minstrel shows were one of the most popular forms of mass entertainment in the USA. Comprising monologues, comedy routines, songs, dances and sketches by performers in blackface make-up, they presented an exoticised and caricatured version of black culture. Post-Emancipation, troupes of genuinely black performers began to take to the stage, but still blacking up and offering self-caricaturing routines, because that’s what audiences had come to expect. Undeniably demeaning, if not always intentionally racist, minstrel shows arguably helped to create a culture in which even legitimate black entertainers, well into the 20th Century, felt compelled to adopt a buffoonish stage or screen persona for the sake of commercial success.

Once his boss, Thomas Dunwitty (Michael Rapaport) has given him the go-ahead for his new show, Delacroix throws all his energy into developing it. He recruits a team of white writers to create skits for the performers – even encouraging them “channel their white rage”. The show quickly becomes a huge cult hit, with even the (racially mixed) studio audience turning out in blackface. But Delacroix and his two star performers gradually develop a crisis of conscience, and he faces growing opposition from his PA Sloane Hopkins (Jada Pinkett-Smith) and more ominously from a militant underground rap collective, the Mau-Maus.

We also learn that Delacroix has self-esteem and identity issues of his own. His father, it turns out, is a stand-up comic whose earthy routines draw upon his own experience of being black. Pierre has rejected his own background to the extent of changing his name (really Peerless Dothan) and even modifying his speaking voice so that he sounds white.

Yes, "Bamboozled" has its flaws – there are cultural references that virtually nobody under sixty years old will get, and it fluffs the opportunity to lampoon hip-hop culture. To its credit, however, it does not attempt to prettify the historical racism of the entertainment industry. I learned from the featurette that some of the scenes were shot with a subtle blue filter so the burnt cork make-up would look like cast iron. It's as if the performers are not only disfigured by their make-up, but imprisoned by it. It implicitly criticises many aspects of modern culture without letting anyone off the hook – including faux-antiracists like Dunwitty – and raises many questions about the representation of minorities. Who gets to decide how other races should be represented on screen? Who gets to decide what’s offensive? And can just about anything be made acceptable if you dress it up as “irony”?

In this age of "micro-aggressions", "safe spaces" and "trigger warnings", in which there are ever more restrictions on what can be said in public without inviting censure, it is more relevant and vital than ever.

An incredible film that shakes you to the core. Probably not one to have watched with my 12-yearold daughter but it's certainly given us lots to talk about. Very highly recommended.