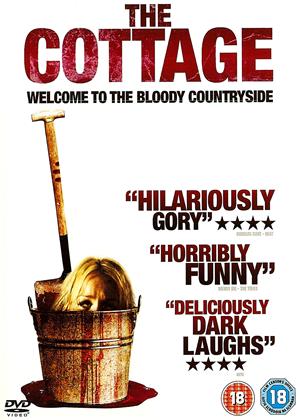 Reviews (2) of The Cottage

The song that plays over the end titles is called "Kill Kill Kill" - and that gives you a good overview of what this film is about. It's a low budget British 'comedy horror' film directed by Paul Andrew Williams, who directed the very good (if somewhat grim) 'London To Brighton'.

The storyline goes like this: bungling kidnappers hole up in a remote cottage with their shrewish, foul-mouthed blonde victim. Her father sends two Korean hard men to the rescue, but they meet a sticky end. Murderous disfigured farmer from next door then proceeds to slaughter everybody - and I do mean everybody. There's also a final scene after the end credits.

Yes, I really do mean slaughter - violently, with assorted weapons, much gushing of blood, dismemberment, adding to an extensive collection of trophy body parts etc. Rather good if you like that sort of thing :)

There's far too much f-ing and blinding for my taste, but the film did make me smile in several places and the director pays homage to many other horror / thriller films - see how many you can spot. One that I'd not seen done before is a small tribute to 'Predator' as the maniacal killer removes spinal cord + head from one unfortunate victim - that should give you some idea of the shlock you'll see here.

Because it made me smile I'll give it 3/5 stars - just don't watch it with your granny 'cos she probably won't appreciate the language and gore :)

Reviewing a comedy is difficult. If you examine the jokes too much, they fall apart. If you quote various lines out of context, they lose their impact. ‘The Cottage’ is very much of the type that deserves to be watched, enjoyed and left at that.

My one real problem with this are the excessive profanities. At the risk of sounding like everyone’s elderly parents, I found such expletives are shockingly funny to begin with, but become wearisome once they are established as the normal way of speaking. Other than that, this is a fine slice of black comedy. Politically incorrect in places, but mainly the laughs come from the extravagant blood and gore on display.

Tracey’s large breasts only feature once as the focal point of the comedy, serving only as a distraction allowing her to get the better of Peter. The males are the subject of the humour here, their ineptitude and consistent failures causing the mayhem that propels the story. It’s good to see Hellraiser’s Doug Bradley in this, but a shame his appearance is limited to a ‘villager with dog’ credit.

All performances are enjoyable, with the excellent Shearsmith getting the brunt of the gory punishment. With Serkis, it is easy to note his performances as a number of CGI creations in other films, but this is a reminder what a good ‘physical’ actor he is too.