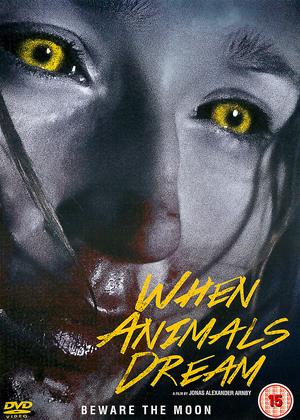 Synopsis:
An outsider in a small coastal community, 19-year-old Marie (Sonia Suhl) lives alone with her parents. She has no one to confide in except Daniel (Jakob Oftebro), a young man mesmerised by her wild nature. When Marie discovers her body undergoing a transformation, she begins searching for answers linked to her family's hidden past. Her father tries to keep her safe from the watchful and fearful gaze of the townspeople, but something rebellious within Marie cannot be tamed. Soon her search for the truth will send her on a collision course with everyone around her - with the exception of Daniel, who will follow her to the end of the night.
Actors:
Sonia Suhl, Lars Mikkelsen, Sonja Richter, Jakob Oftebro, Mads Riisom, Gustav Dyekjær Giese, Esben Dalgaard Andersen, Stig Hoffmeyer, Benjamin Boe Rasmussen, Tina Gylling Mortensen
Directors:
Jonas Alexander Arnby
Producers:
Ditte Milsted, Caroline Schlüter
Writers:
Rasmus Birch, Christoffer Boe, Jonas Alexander Arnby
Aka:
Når dyrene drømmer
Studio:
Altitude Film Distribution
Genres:
Horror, Thrillers
Countries:
Denmark

Reviews (1) of When Animals Dream

On beginning her new job, shy Marie (Sonia Suhl) is greeted with ominous words, ‘Since you’re new, you’ll have to get rid of the fish waste.’ Marie is shy, occasionally sullen, and seems to be suffering from an un-diagnosable disease which leaves marks over her body. Getting rid of the fish waste is only the start of her challenges, in this film set in a Denmark fishing village …

At first, the abuse she receives at work seems like vicious, testosterone-fuelled cruelty disguised as high jinks, and it isn’t until later we discover there is reason for the resentment the locals have against her family. Marie’s mother (Sonja Richter) is catatonic, and late one night, Marie spies her father Thor (Lars Mikkelsen) shaving her shoulders and back. This is doubly cause for concern for Marie, as blemishes she is beginning to exhibit also feature the sprouting of down-like hair.

Thor’s history is revealed slowly. His wife is heavily medicated because her disease has a history of turning her into a killer. When it appears Marie is similarly afflicted, the local doctor, under Thor’s instruction, takes steps to anaesthetise her, when her mother springs into life and kills him. Shortly after, he is secretly buried in the garden, and she drowns herself in the bath.

Online reviews compare this to ‘Let the Right One In (2008)’, in that it can be seen as a kind of coming-of-age drama as well as a horror film. There are similarities.

When her work-mates continue to torment her, their wariness of her family giving them an excuse to act in their vindictive manner, it is hugely satisfying when Marie’s lycanthropic rage leads her to kill main protagonist Esben (Gustav Giese) – in fact, it’s a pity his suffering isn’t greater! Eventually, Marie is taken aboard a trawler where the locals intend to kill her, most likely dump her in the waters. Her subsequent slaughter of the entire crew puts me in mind of Dracula’s exploits aboard the Demeter – it is last seen as a ghost shop, drifting aimlessly. On board, only Marie remains, sleeping and child-like again, alongside Daniel (Jakob Oftebro), the only person to show her consistent kindness.

The sedate pacing may not appeal to everyone, but this unspectacular direction allows the story to tell itself, and for the characters to breathe, and is the way a truly atmospheric horror story should be told. Highly recommended.