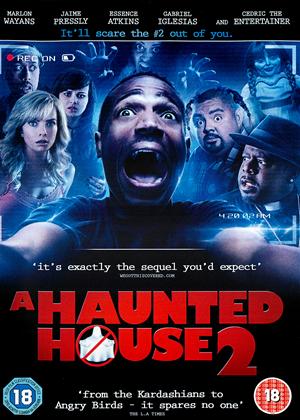 Reviews of A Haunted House 2

I think I must have been about thirteen when the first Scary Movie film came out, and I know I loved it, it was funny and shocking and filled with sex and toilet humour; exactly what most thirteen year olds want to entertainment. Add the horror/slasher element and most of my generation were blown away by this new generic trend.

Almost fifteen years later, with five Scary Movies released and goodness knows how many similar spin offs I think even contemporary thirteen year olds will admit that the genre has had its day. Film makers however, seem to disagree, which is why we are faced with not one but two Haunted House films.

After exorcising demons from his girlfriend in the first Haunted House film back in 2013 Marlon Wayans’ Malcom returns to find his new life with new girlfriend Megan (Jamie Pressley) and her two children out in the idyllic suburbs dogged by apparitions and hellish monsters.

One would have thought that Wayans himself, having appeared in both the first and second Scary Movie films would have had enough of this nonsense by now but, clearly not, as less than a year after the release of the first Haunted House picture another feature – that let’s be honest is almost identical to the first – is already hitting theatres.

If the narrative and theme were not tired and over-done enough to put you off Haunted House 2 then the shockingly rushed production will do it; written, filmed and put through post-production in less than a year the film’s script is dire, the setting unimaginative and the plot both stupid and pointless.

Pressley and Wayans give it their best as actors but there isn’t really anything here for them to work with so after a while it’s easy to see that just gave up. If nothing else one can at least see they enjoyed making the picture, unfortunately however, the audience isn’t going to take the same pleasure in watching it.