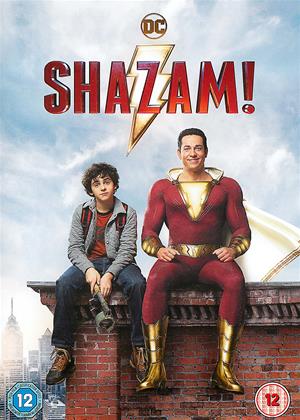 Masses of computer graphics, naturally. Most films these days are like watching PC games now. Is quite good fun, kids can probably watch this one quite happily, has good juniors input as a core.

Brilliant both me and my partner enjoyed this film , suitable for family viewing , think the kiddies would love it x

This is nothing like the other DC films; juvenile and irritating. Probably aimed at children, not adults. Cannot imagine what the follow up will be like.

Great to see the Original - Shazam! review by MM

Wonderful to see a film adhering closely to the original Captain Marvel comic books, even though for ( mysterious ??!?) reasons it was impossible to give the hero his name.  Otherwise, the movie was true to the silly spirit of the comics, complete with daft magician/magus, juvenile orphan  hero,  and even a Marvel "family"  to complete my aged nostalgia-trip.  Pity not to give the Captain his name, though....

After a long-winded opening 35 minutes, a 14yo boy is transformed into superhero Zachary Levi. After that the plot moves along pacily enough as he explores his new powers, eventually to face off against supervillain Mark Strong. It’s kids’ stuff, with the usual superhero cgi and generic orchestral score, plus suitably right-on messages about family and empowerment, but it’s watchable enough in an undemanding way.

Funny and a send up really. Mark Strong doing his usual baddy act; talk about typecast. Entertaining hogwash. May as well just make films like this in animation format, most of the good stuff in it is CGI anyway. The Incredibles were much better films and managed to send the subject up too. However, worth a watch, kids will enjoy it most methinks.

This was a Big superhero movie - see what I did there? - Shazam! review by DS

Depending on your viewpoint they will definitely be parts of Shazam that will annoy you. I have to be honest I find the whole premise of superhero movies a bit silly and I never showed an interest in any of the comics from a young age until an adult. My boat was never afloat. I will watch them on film and I have viewed all of interminable Marvel Universe series, with the explosions, and so forth, but in general I like these type of films with a light touch, so Spiderman, Guardians of the Galaxy, Deadpool, oh I know they have a serious side but the touch is light, now we can add Shazam!

I would say this film is a great big smile of a movie, it is clearly made to be enjoyed, to be entertained. With the casting of Zachary Levi the makers got the perfect focal point. He exudes the joy of being a boy in a grown-up superhero body with the fun and underlying seriousness this brings. So far so Big, so far so daft.

The rather bland peril given to Billy, his alter ego and his best friend are very ‘comic-book baddy’ boilerplate and although they are given to the very capable and charismatic Mark Strong the whole story was much less interesting or important to me than the dilemma that being Shazam brings up for Billy and his best friend and indeed surrogate family. It is much more compelling.

Therein lies problems for Shazam!, it’s great and it’s fun but it can’t escape it’s superhero restrictions. Boring pointless baddies whose motive and plans seem ludicrous and ill-thought-out. Although this does give the film and most joyous and fun ending.

The special effects, set pieces and overall look of the film are good, A super impossible situation mixed into a blandly normal world is tried for in many superhero films and with Shazam! this attempt is definitely more hit than miss. The direction and editing move the story on at a good whip and the film never sags which in these types of films can definitely be a problem.

Overall Shazam! is a bright, joyful, fun-filled film and with the genius casting of Zachary Levi in a role, he was seemingly born to play you have a film with way more summits than troughs and you should get just over two hours of entertainment.

You cannot really ask for much more can you?

A family friendly addition to the DC comic book universe, where usually only violent and dark films ensue but here we have an overly long but enjoyable jape with plenty of laugh out loud moments. This is a superhero genre film played for laughs, a little clichéd but still very entertaining. The story is fairly genre basic and predictable with a young streetwise kid, Billy (Asher Angel), placed in foster care but who keeps getting in trouble. He is selected by an ancient wizard (Djimon Hounsou) to wield powers to fight a team of nasty demons who congregate together in a super baddie played by Mark Strong, who is clearly having fun but does this sort of thing standing on his head. When Billy says 'Shazam' he transforms into the adult hero who finds he has powers and can buy beer! It all culminates in the usual big punch up with masses of destruction and full of jokes about super powers and the genre in general. This is good fun and can be enjoyed by the whole family so it's well worth an evening's viewing. (There's a scene mid end credits so don't switch off too soon!)

Shazam! (aka Billy Batson and the Legend of Shazam!) review by Mark McPherson - Cinema Paradiso

The superhero cinema landscape has been evolving to such a great degree that the stories are no longer just that of a mere super-powered good guy trying to defeat a super-powered bad guy in visual effects feats. We’ve seen cultural commentary brilliantly woven into the kingdom politics of Black Panther and seen a dramatic shift in staging adventure around a villain in Avengers: Infinity War. But then there are films such as Shazam which offers a breath of fresh air to remind us all that superhero pictures can still have a warm and charming sensation of escapism. And, let’s face it, the premise of Shazam isn’t exactly one best suited for a tale of gritty realism akin to the dismal Batman v. Superman.

While still a fun idea of a superhero, the film doesn’t shy away from being genuine with character, maintaining a certain level of earnest devotion to the source material previously seen in DC’s Aquaman. We meet an elder wizard who is seeking to bestow his powers towards one who is pure of heart to help him continue the battle against the seven deadly sins. His name: Shazam! Okay, not the most profound wizard name but when played by the intimidating and serious presence of Djimon Hounsou, you kinda believe it a little more.

But you still have to smirk, as does the smart-mouthed orphan Billy Batson (Asher Angel) who doesn’t buy the whole magical battle of good versus evil as easily. All he is seeking is to find his mother who mysteriously vanished when he was a little boy. He has no strong desire for superpowers, especially with his new foster home roommate Freddy (Jack Dylan Grazer) constantly bragging about Batman and Superman. But then something unique happens that makes Billy a little interested in superheroes; the code word of Shazam transforms him into an adult superhero with magical powers, played by a stunned and ecstatic Zachary Levi.

In his Shazam form, Billy and Freddy are a lot of fun the way they test out these magical powers Big style with viral video documentation. He can fly but requires a lot of practice. He is bullet proof but they need robbers to shoot him in the face to make sure it’s not just body armor from his lightning bolt suit. And some tests take a hilarious turn, as when one experiment on teleportation quickly turns into one of being flame resistant. The two have amazing chemistry that I’m extremely thankful most of the film revolves around their relationship.

Naturally, there must be a villain for Shazam to fight. Mark Strong, who you may remember in the role of Sinestro from DC’s previous dud of a Green Lantern movie, take on the role of Doctor Sivana, a man who grew up bitter when Shazam denied him those magical powers. No matter. After much research, Sivana tracks down some demons to help him take these powers by force. And while this seems like a rather stock villain setup, Strong seems to be having as much fun in this sneering role as Levi is the peppy superhero. He’s also a major threat when seen in a rather brutal sequence of massacring a board room of executives with his demon brethren.

Aside from the villain’s horror movie aesthetic, the film keeps its focus rather well on being a kid-centric adventure. The relationship of Billy and Freddy keeps it in check but there’s also a number of other quirky foster kids in Billy’s new home that adds so much charm and heart to the picture. Going back to the genuine nature, I really enjoyed how heartfelt Billy’s closure on his parents felt, never trying to soften the edges of a rather somber moment of growing up. To call the film merely a fun outing with these striking scenes would be a disservice to how well-crafted a superhero movie this is.

And the usual bells and whistles are all gleaming here. The fights are visually stunning, the banter is witty as it is adorable, and the humor is so astute and daring that the script throws a heaping helping of shade at the DCEU, almost as much as Teen Titans Go To The Movies. While not the most redefining superhero film of the decade, Shazam treats its character and his world with a joyful throwback aspect that is better suited for the younger than the grimmer comic book adaptations of recent. There’s a Richard Donner style wit and excitement that makes the film a touching throwback at times to simpler superhero films that may not have had the most redefining stories but always carried a fantastical tone of escapism most pure.