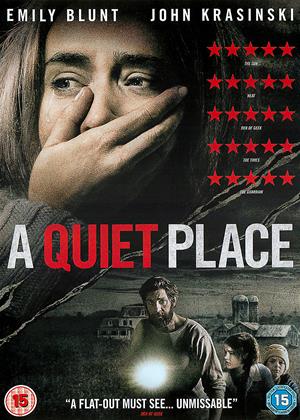 This is a reasonably tense sci-fi horror with some effective jump scares but - oh my goodness - it is full of major plotholes and inconsistencies that caused my suspension of disbelief to break at an early stage.

The main one that bugged me is: how are they generating mains voltage electricity? Also, why do they walk around outside in bare feet? And the big one: why are they having a baby in a world where they can't make any sound? Looking at bad reviews online there are plenty of other people pointing out all the others, and there is a lot of them. The questions become increasingly distracting as they mount up throughout the film and are never answered.

Despite that, this horrifically over-rated film is worth watching once.

Another film that makes NO sense ? - A Quiet Place review by PF

I had been very much looking forward to this film and yet again another massive disappointment. The film makes zero sense. I could not understand why a couple would choose to have another baby, when their youngest had been eaten by these creatures. There was no background as to where they come from. At the beginning of the film they allow a three year old to wander around alone yet are petrified of him making a noise. The whole story was ridiculous and frustrating. Just as the film started to interest me IT ENDED. So glad I didn’t go to the cinema to see this film.

This film starts with a neat idea - people have to stay quiet or they'll get killed by monsters.

Now therein lies 2 problems: 1) I could not suspend my disbelief re these monsters, rather as with Cloverfield - the reason why they are here on earth is never addressed and they're just CGI monsters not real ones like dinosaurs. 2) I simply could not believe people and esp children could stay completely silent for years.

Also, animals would all be wiped out in an instant surely and birds because they cannot stay silent - which is another massive plot hole.

Predictably, this turns into a feminist movie at the end - a yawnsome cliché these days.

It is so derivative too - reminded me of The Road, Cloverfield, even Jurassic Park and the old horror film Tremors (with Kevin Bacon!). Plus the usual trope of running through a cornfield (maize actually). See many movies for where that came from.

So an average film which cannot sustain its main premise really, despite trying and it is very trying as the jeopardy is predictably raised with the predictable pregnancy/baby trope and the flood (all done better in Apocalypto).

A mediocre forgettable affair so 2.5 stars rounded up.

SPEAK UP ! - A Quiet Place review by JD

I rented this after reading several rave reviews —- but was not impressed.

The story is so implausible and the holes in the plot are a major turn off for me.

How do they generate electricity “quietly” ?

Today I have bought two tickets for this movie in Brighton marina cineworld cinema , but my son is under 15 so they refuse us to enter, after returning home, I found out we can rent movie at home.

3 out of 32 members found this review helpful.

Very tense and suspenseful Emiliy Blunt is superb as usual, great cgi monsters and fantastic sound, you need a quality surround system to enjoy this movie. Plot is very thin has no beginning or ending really! But highly entertaining all the same.

A few plot holes, but on the whole ok - A Quiet Place review by AL

Really enjoyed this film and nice and short as well. A few plot holes as the film progressed, why were ground animals still alive. Great acting and suspenseful. Kids acting was really convincing. Made me jump a few times.

Tense and entertaining - A Quiet Place review by PC

Taking a very simple premise, alien creatures hunt by sound so you have to stay quiet, the filmmakers have produced a truly tense movie experience. It helps that the family are very likeable and the acting excellent. There may be some slight plot holes but that does not effect the enjoyability factor. Highly recommended.

Save your time. Don’t watch. Ridiculous and unbelievable! Such a silly story. Felt cheap. Don’t bother

The alients were good... - A Quiet Place review by AL

...shame about the rest of the movie. It was not dreadful, just silly. The first half looked a bit like The LIttle House on The Prairie with monsters.

Probably worth a watch .Not too long.Quite well done for what it is.A bit corny & silly in places & the family unit theme is a bit rubbishy with average dialogue .There is some tension but I wouldn't call it scary.

Where most movies begin with a bang, A Quiet Place begins in silence. It lingers long for the Abbott family, having survived over 80 days after an apocalyptic event that has wiped out most of humanity. And that quiet must remain if they hope to stay alive. One loud noise, one word uttered, one step too loud, and they’ll find you. Who are they? We’re not sure. What we do know is that they’re blind, have excellent hearing, and can kill you within in an instant if you’re heard.

The Abbott family fights on past the 400th day of the end of the world. They now reside on a farm with nearby communities where it’s become easier to maintain the dedication to the devoid of sound. John Krasinski plays the father, Lee, that has devoted all his energies into keeping his family safe and fighting back the silent killers. He studies up on how to fight back, maintains an array of security cameras, and tries to keep everything in their a house just shy of a whisper. That’s hard enough, but the task becomes even trickier when he has to plan for a baby, as his wife Evelyn (Emily Blunt) is due soon. Of course, plenty of concerns arise about having a baby during a time of silence. There are answers, but even so, Blunt places a considerable amount of tension to her character’s motherly determination to bring new life into world most dark.

Their kids don’t have the same amount of optimism. The deaf daughter Regan (Millicent Simmonds) blames herself for a death she could have prevented and despises her father’s constant and failed attempts at developing a hearing aid for her. While her deafness has aided the family well in their use of sign language to stay alive, her disability proves to make her an easier target. Still, she seems to have no problem venturing out on her own and the parents are confident enough that she’ll make it home safe if she ever gets lost. The son Marcus (Noah Jupe) isn’t as downtraughten, but very much afraid when realizing he may have to take over as the hunter of the family. He’s naturally terrified of facing the savage creatures that dwell in the forest, but, just like his sister, he’s aware enough of the rules to make only the most modicum of mistakes.

Krasinski pulls triple duty by starring, co-writing, and directing the film. His filmmaking is smart, creative, and makes great use of the senses. Notice how the story slowly reveals itself over scenes entirely devoid of dialogue. There’s no brief glimpse of what happened on day 1, no overly-long exposition as to where the creatures came from, and not a single word of audible dialogue until twenty minutes into the movie. Krasinski takes the old notion of “show, don’t tell” to heart greatly with a movie that shows so much it almost doesn’t have to tell us anything. From uniquely staged shots, we learn everything about the creatures, the Abbott family, and the rules of staying alive by keeping your mouth shut.

While Krasinski is certainly strong as the worried father, it’s ultimately Emily Blunt who steals the show. When it’s finally time for the baby to come, labor arrives at the most inopportune of moments. For any parent or expecting parents, you’re going to dig your nails into your seat when watching Blunt avoid the creatures stalking her while trying to push out her kid. As a parent myself, it’s easily one of the most nerve-wracking scenes I’ve seen in a horror movie this decade. Her scenes put a whole new spin on Blunt’s gritty action persona and make me appreciate her all the more as an actress of amazing intensity.

A Quiet Places manages to be a frightening horror, an artful display, and a rollercoaster of excitement for being the little creature feature that could. I’m not too sure how it will play out at home for viewing, as the constant drops in the sound make for the most exciting of theater experiences when you can hear everyone in the theater quietly gasp or grit their teeth when the monster is near. Be sure to watch it with friends as their reactions will add an extra level of entertainment. You won’t even have to take your eyes off the screen to know their reaction; you’ll hear it all while your eyes will be mesmerized.