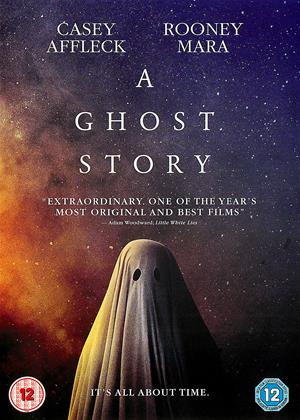 I found this film slow, tedious and monotonous, and I must say it's one of the worst films I've ever seen. The scene where Rooney Mara ate a pie for 10 minutes was the highlight! I watch a film to get entertained, not to send me to sleep! The "metaphysical undertones" were lost on me, and I had no empathy for any of the characters. I ordered it because Casey Affleck has been in a lot of films I have enjoyed, but I think he made a mistake with this one. Some reviews say it's a "love it or hate it" film, and as you will have guessed, I hated it!

Well, this one has certainly polarised the reviewers! Personally I agree with the "emperor's new clothes" viewpoint; there's almost nothing to this film, but the gaping void at its heart is hidden behind a smokescreen of pretension and deliberate obscurity. Let's get the elephant in the room out of the way first. According to this movie, when you die you become a small child's idea of a ghost, as in somebody draped in a sheet with eyeholes. And it's literally a sheet; the ghost next door, who presumably couldn't find a plain white one, is gaily decorated with pink flowers. Why? Because it's The Gimmick. An idea like this might be a sound basis for a ten-minute short made to pass a film school exam, but a cinematic feature? Not so much!

To stretch what little plot there is to feature length, almost everything that happens takes far, far too long. The ridiculously extended pie-eating sequence stands out (I hope for the actress's sake they got that in one take!), but throughout there are scenes where something time-consuming occurs for no good reason. Near the beginning, the leading lady drags a trunk from the house to the dustbin. It's very heavy so this takes her a long time. Since I knew her boyfriend was going to die (the clue's in the title) and you'd think he'd help the poor girl shift something she's only just strong enough to move, I assumed from the way the camera was dwelling on this as if it was hugely important that his body was in the trunk, which would provide a logical reason for him to haunt her. Nope. We never do find out what's in the trunk, because it doesn't matter in the slightest. She's just putting out the trash.

The whole film's like that. The almost completely passive ghost moves around slowly or stands perfectly still watching life continue without him. He can't speak, and although he does sometimes interact with solid objects, it happens so rarely and inconsistently that it comes across as though his poltergeist powers are triggered by hatred of Mexicans. I suspect that oddly out-of-character episode was included purely to allow them to make a deceptively action-packed trailer. Apart from this, hardly anything happens, and when it does it's often baffling. For example, suddenly the ghost can time-travel. Why? Search me! But it's incomprehensible so it must be Art.

The central character is faceless, voiceless, mostly powerless, often motionless, and for three-quarters of his screen-time totally unidentifiable as Casey Affleck, inevitably raising doubts in the viewer's mind as to whether it's really him because there's nothing remotely interesting happening on screen to distract us. At one point the late Mr. Affleck (or whoever that is under the sheet) watches paint dry, the only time I can remember seeing this literally happen in a movie. In fact, I'm not sure the word "movie" is strictly accurate, since it's more of a still life. Or possibly, given our hero's lack of metabolic processes, a still death? Whatever. As the old saying puts it, you're a long time dead. This film certainly conveys the tedium of being a mute intangible wisp with a bag on your head forever, but I don't think I really needed or wanted to know that. Frankly, if they'd left out the ghost entirely and simply shown the nameless guy's nameless girl gradually getting over his death, intercut with lengthy shots of his grave looking more and more neglected, it would have been equally meaningful and only slightly less entertaining.

Slow but impacting - A Ghost Story review by DB

A very slow, thoughtful but ultimately moving film. By the end both myself and my wife had tears in our eyes and sat in silence for a moment as the credits rolled. It is very, very slow and is hard to recommend on anything other than it is incredibly moving and impacting. Don't expect action, plot twists, scares or any of that sort of stuff. Whilst this is a Ghost Story it is not about bumps in the night. It is about loss and the passage of time. We enjoyed it very much.

Slow but impacting - A Ghost Story review by DB

A very slow, thoughtful but ultimately moving film. By the end both myself and my wife had tears in our eyes and sat in silence for a moment as the credits rolled. It is very, very slow and is hard to recommend on anything other than it is incredibly moving and impacting. Don't expect action, plot twists, scares or any of that sort of stuff. Whilst this is a Ghost Story it is not about bumps in the night. It is about loss and the passage of time. We enjoyed it very much.

A waste of time. As usual, too much middle. I kept wondering if Affleck was under the sheet throughout the deadly dull scenes.

Unusual, quirky, interesting, stylised take on the ghost story genre with a great score - A Ghost Story review by PV

Warning to anyone under 30 who wants the usual CGI horror-fest or Japanese style horror movie scares. This film is contemplative and stylish - and some would call it slow (it's obviously influenced by that French director Michel Hahne or something, with several long still shots of a house or something for 20 seconds plus, which can be trying...)

At first it's laugh out loud silly - like the director fell into the dressing up box.

BUT if you are willing to suspend your disbelief, which I was for SOME of the time, it's actually rather fun and enjoyable.

Loads of flashbacks, and a supposed revelation at the end, and some stuff is never adequately explained.

But it's imaginative and different from the usual Hollywood scarefest drivel, and I liked it.

AND I absolutely loved the score and the music in this film.

This is a very slow and almost boring film The plot is predictable and acting below par. Affleck mumbles his way through a tedious and tiring script. Personally, I think watching paint dry would be more engaging.

At the outset I watched this knowing it was going to be quite different and as many have said it is not for everyone. If the basis of the spirit is a rather cartoon depiction of a ghost portrayed under a sheet it enforces the premise that it not about what a ghost looks like. It sidelines this draws the viewer to other aspects or ideas it presents. The production company of 'Scared Sheetless' sums up the humour of the approach.

I found this film more and more fascinating the more it progressed. It left me with some thought provoking concepts about the spiritual side and has a lot to do with how people cope with loss which is beautifully acted by Rooney Mara. There are a couple scenes where film footage is concentrated on the seemingly inconsequential - The obvious being the pie eating! (not a plot spoiler don't worry) It does make you hungry however!

I don't usually care too films with an overuse of non-chronological footage but in this case with the subject matter it is used carefully and meaningfully to powerful effect. This is an artistic film as well, the scenes artfully put together with lovely images and wonderful music. There are some stirring and interesting concepts that the viewer is left with and I found it very rewarding to watch.

If a test of a good film is how much it makes one think and talk about it afterwards this passes.

Watched the bonus features and cut scene as well and intend to listen to the music of Dark Rooms.

Not a big reviewer of films but felt this richly deserved a write-up.

Don't waste your time on this! - A Ghost Story review by RM

I wish I'd read the reviews before renting this rubbish. I would have only given it half a star but you can't do that with Cinema Paradiso. Big star names can't save a crap film like this. This was a waste of money at all levels.

Ghostly .... but Mostly Dull. - A Ghost Story review by porky

Its actually a Very Beautiful Movie, rather Charming and Rather Sad....However it is soo slow moving it feels more than a bit Dull .

I actually Loved it but ,as I say its rather Dull, I Never will sit down to see it a second time.

Its Clever, Touching, Funny ,Sad and almost a Silent Movie .

Definitely Worth seeing ,just don't expect to be Fully Entertained by it.... Its an Oddity, Clever and yet Very ,Very Simple .

I can understand why film studies students and art house lovers would like this movie. I will give anything a go and love films that are different but after half an hour I got to the pie eating part and had to go and get a sheet and watch the rest of the film from under it (with no eye holes) much better !!!

Well this must have been a tax dodge for somebody because it wasn't a film! And if it was, it must have been one of the most tedious, pretentious, stupidly boring films I've ever seen. Please don't waste your time on this one.