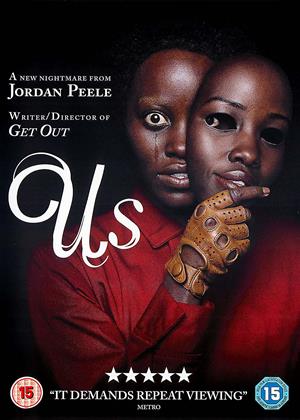 Not very good - Us review by DF

Very disappoint after Jordan’s first effort Get Out, not  sure how it can be called an horror, i’ve seen episodes of Scooby Doo that we’re more scary, but as they say each to their own,

8 out of 15 members found this review helpful.

One of the very best - Us review by CS

Get Out was excellent but this follow up is even better. One of the best 'cross over' horrors ever and should appeal to mainstream audiences.

Instead of relying on blood and gore (though there's enough of that), the suspense builds within a narrative that explores the threat posed by the 'return of the repressed'. If Get Out was a commentary on American race relations, this is a far wider exploration of the role of 'others' within and outside the self. Excellently acted, taut in plot and well placed occasional humour to lighten the suspense, this is a must see that will probably reward repeat viewings.

A great original watch - Us review by AL

I had no expectations of this film, I'm not one to compare directors bodies of work or judge a film based purely on a previous body of work.

Us is a great film, well acted, original (yes some parts can be compared to other films but show me a film that can't), and an all round good watch.

Tense at times, with a bit of gore and mayhem but quite mild by today's standards, thought provoking and thoroughly enjoyable.

Watch it for what it is and in a you will enjoy it too.

Us and Them - Us review by porky

Interesting Idea, Pretty Good Story but the Characters ,especially the Father and the Neighbours ,are just Useless Idiots that actually deserve what they are being dealt out.

To me the Movie could have ended a good half hour earlier and still made sense, it seemed to keep going when it didn't really need to.and actually became pretty boring by the finish . couldn't actually wait for it to end because the characters were getting on my nerves . it kept hitting what you thought was the end and then went on further ...got a bit tedious.

A Good Movie, but could have done with a lot more editing ,and some character depth.

Classy horror-thriller - Us review by Alphaville

Perplexing story racks up the tension for the first half-hour thanks to beautiful direction from writer/director Jordan Peele. Smooth Kubrick-style camera movements and tense music raise expectations that in a lesser thriller would have someone jump into shot from the side for a cheap scare. This is a much superior film that has you aching for understanding and resolution. And when it breaks out… expect action at a pace that never lets up, laced with black humour. Those of a nervous disposition may wish to look away. The only downside is the unconvincing climax, but that should not detract from what has gone before.

Get Out and Us show that Jordan Peele is a filmmaker to watch. As he says in an interesting bucket-load of Xtras on the DVD, he wanted to make a film that is both terrifying and fun. He has succeeded.

Effective thriller - Us review by KF

Not a special effect in sight, not needed, effective enough without them. Well put together but perhaps the story could have done with a few nuances as it was in danger of becoming repetitive. The film deserved a better ending too. No cinematic glory here but entertaining all the same.

US vs THEM - Us review by BG

The premise for this horror film has a few parallels with the Irish thriller THE HOLE IN THE GROUND, which concerns tunnels beneath the earth and doppelgangers, but had a few nice touches. The ending might appear illogical, but there's a reference to ALICE IN WONDERLAND, with a white rabbit and going down the burrow. Also some black humour (no pun!) when a dying woman crawls to her dead husband, and the music system plays "Good Vibrations" by the Beach Boys. When she tells the system to call the police, it plays another track instead... One that is derogatory to the police, but would mean a swear word! Horror films usually deal with the fantastic, so viewers shouldn't be too put off by what might appear to be an nonsensical premise. This is well made with an interesting idea and lots of tension.

I'm sorry, but this was a standard horror, full of the usual tropes & jump scares. Nothing special, and not worthy of the endless rave reviews (unless you've lived in a cave your whole life & you've never seen a horror film before).

No matter how much the critics praise its allegorical messages & say it should be appreciated on that level, that's not going to happen if the film is so tediously dull & predictable to the point that the viewer doesn't even approach a level of interest which would spark that level of care.

This film is too long, over-written, badly-acted, derivative and certainly not profound which it no doubt thinks it is with all the guff about 'the other' and 'replicants' and cloning. At one point it actually has to EXPLAIN what the backstory is - never a good sign.

It is a flabby film, with silly parts, and a focus on imagery and style, like a glossy advert.

No idea what point the film maker is trying to make and I am guessing he doesn't really know - he seems to think if he chucks in a lot of black actors and focuses on that, it makes a movie meaningful, Well it doesn't. It is, in a word, a gimmick.

I saw the twist in this coming a mile off. GUMPY's MIRRORLAND has the same plot. Check it out Google it. A film in the 70s with David Niven and is shadow double did it better.

But i's not all bad. Flabby in the middle - but the silly sci-fi plot is something a 14 year old would invent in an English lesson - totally unbelievable and silly leaving lots of unanswered questions.

Honestly, if this movie was made with only white actors, people would be calling it a B movie.

Time not well spent - Us review by BE

This movie was recommended but failed to live up to expectations. A really silly presentation, repetitive and boring.  I endeavoured to persevere but fell asleep half way through!  (One star for playing the Beach Boys' rendition of 'Good Vibrations' during the screening).

Avoid this film - Us review by MC

Absolutely dreadful. A very laboured film that was an effort to watch. It started out well, but descended into caricature and nonsense - we unanimously switched the film less than half way through, and will not be re-starting it. God only knows how this film got any good reviews - if there was a point to the production it was completely lost on me. Bilge.

Jordan Peele’s Us is the kind of horror that is so lovely subtle, beautiful, and thematically dense that you just wanna race back for a second viewing. Peele’s previous picture Get Out was such a smash-hit of horror with great social commentary and satire amid its wild premise fit for the Twilight Zone. And he thankfully proves here that he’s not just a one-note director but a multifaceted one as well, weaving a brilliantly layered film that touches on so much while still being a rip-roaring romp of a slasher picture.

Lupita Nyong'o shines particularly bright in the role of Adelaide Wilson, a woman with a frightening past. As a child, she walked alone along Santa Cruz beach and stumbled into a dark hall of mirrors, encountering a doppelganger of herself. The experience left her traumatized but she grew up and became stable enough to have a loving family. Her husband, Gabe (Winston Duke), is a fun guy who, despite his many dad jokes and dad-isms, has managed to push aside Adelaide’s dread at least temporarily. Her children (Shahadi Wright Joseph, Evan Alex) are also great sources of love while still being odd and quirky people still defining themselves.

But Adelaide still has the nightmares of her past and it’s coming back to haunt her when the family wants to take a trip close to Santa Cruz. She masks her terror but there’s still an unshakable sense of anxiety on this family vacation. And it turns out she’s right to be scared when some strange people show up at their vacation home. Seen in the darkness and shadows at first, the killers soon break in and reveal themselves to be twisted versions of Adelaide’s family, dressed in red and wielding scissors as their weapons. Who are they? The red-dressed Adelaide duplicate offers one answer: Americans.

From that line of dialogue, one might deduce that Us is an allegory all about nationalism, especially with the constant red, a wall of people tethered together, and the undercurrent of lower class rising up again the more fortunate. But the film never makes it message all that clear, keeping the true meaning hidden behind the gorgeous cinematography, fast pacing, and twisted kills. Peele doesn’t make his film an easily-digestible follow-up by staging the presence of the bitter white couple played by Elisabeth Moss and Tim Heidecker as secretly sinister forces. More evident throughout the picture, and the mantra of the story, is that sometimes the most terrifying monster is indeed ourselves, playing greatly into Peele’s thematic trademark of his films being about the mutation and loss of identity.

Another mark Peele makes in this film is how well he can shoot scenes. Nobody could forget that moment of the Sunken Place reveal from Get Out, where Daniel Kaluuya’s character goes wide-eyed with bloodshot optics and tears rolling. Lupita Nyong'o has a similar shot in this picture as well but her performance is something else entirely. She’s expected to not only play Adelaide and her double but also different versions of each hidden behind by shocking secrets with chilling reveals. And let’s not forget Peele’s ease of humor, able to maintain a consistent tone of silly commentary with the family, even when the blood starts spilling.

One could try to compare Us to the likes of other horror greats, even noting the vast similarities to the works of Stanley Kubrick and Brian De Palma, but I believe Peele’s mastery of the genre goes beyond that of such comparisons. He’s using familiar trademarks but also fashioning new and unique ones that will define him as a compellingly original director. Consider how two of the most notable recurring elements of Us are the presence of rabbits and the bible passage of Jerimiah 11:11. Peele’s script never outright explains the bunnies or the passage, leaving the film open for theories on the same level of The Shining. What an inspiring and intricate horror that will no doubt lead to more challenging productions from both Peele and those amazed by this film.