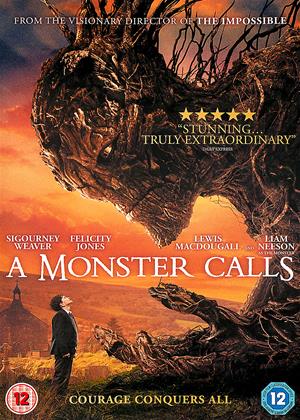 Reviews (8) of A Monster Calls

OK, so this film is a bit too long - esp in act 3 - and layers on the emotion with a psychobabbly trowel sometimes. However, it is also a genuinely moving film about how a 12 year old copes with a broken home and a sick mother - though it does milk it shamelessly!

No idea of the Young Adult novel does the same, though I note the book's illustrator got himself a share of the profits by claiming copyright ownership of the monster image.

The special effects and cinematography are superb - and I notice this is mostly filmed in Spain where other movies with great special effects have been made (the one about the Spanish Civil War Pan's Labyrinth, for example). The director is Spanish too. Outdoor scenes were filmed in the UK in Manchester.

The lead actor is superb and Sigourney Weaver has nailed a normal British accent (unlike most Americans who sound like Dick Van Dyke when they try one!).

I liked the animated sections BUT thought some of those stories within stories a bit weak so the plot was not a strong point here. The whole what and why or the monster is never really explained. The adults also seem weirdly tolerant of the boy who never gets punished for anything!

I also saw the end coming a mile off. This movie will appeal particularly to those who like Hollywood group-huggy family films. It's all very conveniently emotional and aims to manipulative the viewer into an emotional teary response too.

BUT a decent and unusual film, and with British accents for once. 4 stars.

NOT BFG - A Monster Calls review by NC

Quite clever film showing how a child in difficult circumstances deals with his demons....by creating a monster to control them all.....

A MONSTER CALLS - A Monster Calls review by SM

I didn't think I was going to like this film. Very unusual though & good actors in it too. Cried my eyes out.

I didn't really know what to expect. Yet its the story of the child in all of us. The monster is a true wonder in special effects but think of Celtic Art. I was a bit weepy at the end. A wholesome movie for family or solo it will make you think.

Not the film I was expecting from the trailer. - A Monster Calls review by MO

Saw the trailer for this and thought it was about a school kid who creates a monster.

It is, but not in the way the trailer leads you to believe. I enjoyed it, but can't help feeling a little cheated... where's the film the trailer promises?

A waste of time - A Monster Calls review by BE

People appear to either love or hate this movie - afraid I'm in the latter category. The tree was cleverly animated but the movie failed to engage my attention. Sigourney Weaver looked partiicularly uncomfortable in her role as the boy's grandma. Gave up half way through.

Good drama, but very sad in places. - A Monster Calls review by TB

I sort of enjoyed it, but wasn't has good has I thought it would be, has I was really looking forward to seeing this film, so slightly disappointed, but then I don't enjoy films dealing with death of loved ones or similarlying sad subjects, they're things I seem to run away from etc, even in real life if I can. But I did like the monster,though I didn't think it was a scary monster, but then it probably wasn't ment to be.

If you enjoy good dramas & can cope with the sad scenes then I would give it a watch, but don't watch the making of the film in the extras unless you like subtitles, has most of is done by the people who worked behind the scenes & they were moreless all non English speaking people & quite often didn't allow me enough time to read them so I kept having to go back and use the purse button has i'am not a quick reader.

An extraordinarily good film. Great special effects. A story that seems trivial at first, but develops in remarkable ways, providing unanswered questions that ultimately have a serious but beautiful resolution.

A Monster Calls has a misleading title (and while we’re at it, a dishonest trailer) that doesn’t do the movie any justice whatsoever. In fact, it derails and alienates its audience by marketing the film as something that is not, i.e. a holiday fun for the whole family! Well as it turns out, A Monster Calls is none of that: rather it’s a completely engrossing drama that takes you on an emotional rollercoaster, toys with your feelings (in a positive and highly rewarding way), and walks you through a very dark initiation of both body and mind. Long story short, A Monster Calls is a quite the riveting film possibly not suitable for children under 10 years of age.

The film sees Lewis MacDougall in his second full-fledged feature (after the previous critically panned “Peter Pan”) as Conor – a young and talented 12-year-old boy living with his single mother referred throughout the feature as “mum” (played by Felicity Jones) in Northern England. Tragically enough, she has an aggressive form of cancer, but manages to stay positive despite her seemingly hopeless condition. In the meantime, Conor is equally plagued by her mum’s suffering after which he resorts to escapism (dreams, fantasy) in order to cope in light of the surrounding events. And if this wasn’t enough, Conor is also bullied at school as well due to his noticeably “different” demeanor.

A Monster Calls is an emotionally honest film, which works on so many different levels; its art design is extraordinary, featuring gorgeous-looking animations on par with other fantasy-driven fairytales such as Big Fish, the last two Harry Potters, The Fall, and more. The sound mixing is nothing short of brilliant, with filmmaker J.A. Bayona utilising complete pauses to increase the dramatic tension that’s presented all throughout the film (and one scene which I would not spoil in particular). The cinematography by industry veteran Oscar Faura is done with such precision as to leave the viewer with that nostalgic feeling of a chilly, wintery awe. The dream sequences are on par with everything said thus far, and only add to the bleak but hopeful atmosphere that A Monster Calls so dearly conveys. And to top it all, the visual effects (supervised by Pau Costa, notably famous for doing "The Revenant" bear) are mesmerizing and captivating all at the same time: the monster perfectly blends yet differs from the seemingly normal surroundings, and kudos to everyone involved for managing to accomplish a natural feel where other could have possibly stumbled.

Finally, A Monster Calls can be two things for the viewer: either an overly dramatic, and at moments – a highly traumatic experience that will grant you countless sleepless nights, or a cathartic masterpiece serving as an emotional valve unto which you’ll pour all of your emotions in one sitting. Either way, this film will not leave you indifferent in the slightest – a true testimony that emotions do really exist in this day and age after all.