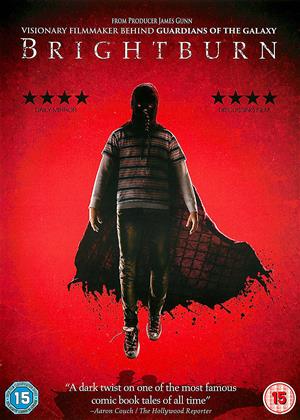 What If ? - Brightburn review by porky

What If Superman was a Psychopath ? .....well you would have Brightburn .

Interesting alternate story of the Alien Child growing up in a Loving Mid Western Childless Family the same as Clarke Kent ,Only This Child is Not a Force for Good.

It doesn't take much to be One or the Other ,just the internal workings of a Specific Child's Mind , Nature or Nurture ? or Alien PreProgramming

Mark Kermode said this was good so I tried it out - I wasn't going to watch it otherwise - and i can confirm it's a goodun! It has the usual child Superhero traits ...ie he finds himself and shows himself, but in essence its about the parents and nature v nurture rather than the superhero infant. I didn't even use the FFWD option so that says it all - it's a gripping film that gets under your skin. You root for him but also you don't root for him, if you get my drift. Elizabeth Banks is (always) excellent as his mum and the child actor is quite disturbing. BTW Michael Rooker is only in it for a few seconds, unfortunately (who can ever forget Henry: Portrait of a Serial Killer). Its a dark and brooding B movie well worth your time.

I am not a fan of superhero movies but this looks interesting and has got great reviews, so I gave it a go.

Initially I enjoyed it, but things get sillier as the movie proceeds until it's all more cartoon than drama with real-life characters.

The best film I have ever seen on the same theme is The Omen II - best views after watching the brilliant original. I found that far more interesting dramatically and thematically.

But then I am sure the superhero fan kids will love this.

"What is this? Where did I come from?" - Brightburn review by EC

The idea behind this is a good one - what if Clark Kent came to earth and became evil? The execution, however, is abysmal.

We are introduced to two people who are having trouble conceiving. Within seconds a spaceship comes down to earth. Then we are shown seconds of home video footage of the boy growing up. Then the spaceship turns on and begins whispering to the boy and he is suddenly evil. He begins hurting people, killing people... This is all in the first 30 minutes. While watching it I had to check to see how much of the film was left because I had no idea where it had left to go, and it doesn’t go anywhere; the whole film is him killing people with no repercussions.

So much vital stuff that would've given the film a beating heart is discarded. We are never shown how the parents had trouble conceiving, how overjoyed or conflicted they were about finding a boy in the woods. We are never shown how the boy is before he turns evil, and after he turns, we never see the boy trying to grasp what is happening to him. We barely spend any time with any of the characters before bad things start happening and, because of this, we hardly care about any of them or what happens to them. The film is devoid of any stakes which is unforgivable.

There are also too many points of view. We see things from the parents’ point of view, then the boy's, then the uncle’s, then the sheriff’s, then an aunt, then an uncle, then a… We see it all so while all the characters wander around confused, we the audience have to patiently wait for them to catch up. But what it also does is kill any tension. It’s like no one has bothered to think that perhaps what happens off screen is more unnerving, that what's out of sight is more terrifying. It would’ve been far more effective if we’d seen it from one point of view – perhaps from the parents – so that the film could’ve served as both a supervillain movie as well as a comment on the frustrations and insecurities of being both parents and adoptive parents. But the film doesn’t care about that. It only cares about the killing and the gore.

But this leads me to the overriding feeling I had while watching this – the film is an absolute mess.

Scenes seem to exist in isolation with no bearing on the next scene, so that put together they rest haphazardly on top of one another. In one scene the boy is looking at some chickens, and seconds later the chickens fry and the father automatically assumes it’s his son; then in a later scene the boy begins messing with a guidance counsellor’s intruder lights, then turns up on her doorstep and threatens her and tells her it will be a bad idea if she goes to the police, and then in the next scene she’s texting her husband goodnight and that she’s going to sleep. Then there is a particularly bizarre scene where the boy’s father accuses him of killing a man while the boy is eating cereal, and moments later he’s in his room apologising for being so hard on him. He’s just accused a boy of murder! What the hell is going on? No scene has any impact on the next. It’s like they’ve been put in a box and shook up.

Characters spout plot points at us without trusting us to keep up. They come to outlandish conclusions to move the plot along. The sheriff, up to this point unsure of what’s going on, sees a symbol at two crime scenes and suddenly knows it’s the boy: “BB,” he tells the boy’s mother. “Brandon Breyer.” The boy’s mother, confused, says she doesn’t see it. She’s not the only one. We realise that he must moonlight as a psychic in his spare time. But it also shows that the filmmakers don’t seem to care about any of the characters in this film. They only exist to be moved around so they can be killed off.

It’s a film that shows its hand too early and from then on seems to be anxiously looking for a place to go and a plot to hold on to, while it careens ever faster into confusion. It's a film that you wish would just slow down for a second and take a look around.