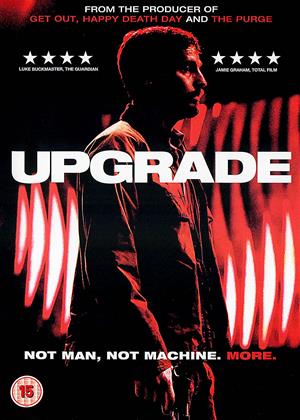 Real adult sci-fi is thin on the ground these days, the space having been taken over by juvenile superhero films, so it’s good to see a film that’s so full of ideas in concept, plot and set design. Constantly surprising, with a dark strain of humour, it grabs you from its start to its whirl of a climax.

Reviewers who place the film in the action-horror genre, not helped by the abysmal spoilerful trailer, should be ignored. All you need to know is that Logan Marshall-Green, “not man, not machine” as it says on the DVD cover, is out for revenge. With a subtext of free will v determinism, this is a superior piece of sci-fi that’s both intellectually and emotionally satisfying. It’s also an exciting action-packed ride.

Whilst not overly original this is an extremely well done film, especially considering it's low budget. Great soundtrack, the action sequences are intense and choreographed nicely, builds up to a pretty chilling finale. Good stuff.

I gave this 4 STARS to encourage people to give it a go.

It's low budget Sci-Fi - always a difficult thing to pull off - it plays like a B-movie with a lot of ambition like the original Terminator was.

Along with some average acting and scripting it has some nice original ideas thrown in along with some inventive production design.

There is some poor plotting made up with a few good/gripping set pieces.

You could do a lot worse.

Delivers on all levels; thriller, action, sci-fi, plot and characters. What's not to like? Add mystery and fast pace, the entertainment value is top of the tree. Afraid AI may become a threat and get out of hand? You will be after this. Minimal special effects and maximum James Bond action set this movie apart from the pack and not a massive budget that these days encourages their use in place of the real thing. Well done delivering this slice of excitement.

Filmed on the budget usually allocated to the stars onsite ‘never-to-be-used’ gym of most blockbusters the makers somehow managed to wring every ounce out of the value of the money. The ‘not too distant in the future’ visuals and science is impressive and is the glue that holds what is in all honesty a fairly hokey story together. Logan Marshall-Green is a fine Tom Hardy-a-like and funnily enough by not being Tom Hardy he does not have to play up to it so the performance is subdued and good. His former Power Ranger wife, Melanie Vallejo, is the motivational force so is not used to the full extent but the relationship, what you see of it, is affecting and most importantly believable.

So far so good. The story itself is not as original as much as it wants to be but as I have said when handled competently this does pale into insignificance. The twist ending is perhaps not as twisty as they like but is still a good moment to close the story and give the Blade Runner, Mad Max, Death Wish and a dozen other films in the mix a nice tidy finish.

Upgrade is hokum but fine grade hokum wrapped in fun, gore and poignancy, the acting is good throughout although it would be nice to see the standard ‘Tech Genius’ being more of a normal person because the character used in Upgrade is well-worn. The special effects and future-world gimmicks are devised and executed very well and add to the overall feel of the story’s world. As the story progresses this gives more heft to the technology that drives us along. All good.

I’ve said it before and I’ll say it again, a tight budget forces makers and production companies to be creative and the results often puts blockbusters to shame, and of course not being able to explode buildings and have hordes of CGI baddies being mown down means more character-driven scenes and more character development.

Been done before, but that's fine. - Upgrade review by TR

Low-budget, and done before, but rarely with as much style and humour. Tom Hardy and Dane DeHaan lookalikes excel.

Clever and well made and rather unusual .

Kept you interested in the character and you really didn't have to wait too long for the story to begin unfolding so no getting bored which is always a boon.

You cold see the end twist coming a mile off but putting that aside it was still a gripping piece of story telling with good effects and some stellar acting in an otherwise low budget production.

Certainly didn't look Cheap, as some low budget Sci-fi can do .

Worth watching more than the once in my opinion.

I really enjoyed this.  The story was entertaining and the acting was good.  Something a bit different and a good ending.  Recommended.

A neat idea and a cool twist in the tale is undermined by a poor script and Logan Marshall Green doing a 'Nicolas Cage'. Finding himself at the centre of a conspiracy after his techy wife is murdered and he has been left paralysed - he is enhanced with a top-secret gadget that calls itself Stem. Stem has the power to operate his body and mind at any time (with his permission). The AI helps our hero solve his wifes murder and his own hospitalisation. The fights with a series of enhanced goons are gory and eyecatching. The film looks the part as its set in the near future and all the sets look excellent. The mood is bolstered by a very atmospheric soundtrack that works - it's a shame the performances are too broad and the plot has some unbelievable plot holes and logic gaps. So all in all - it seemed like it needed a better script and smarter actors. It's a good idea squandered and the rush towards it's great conclusion is like watching someone dying to tell you a secret but buggering up the facts as the lay the foundations of the story down.

Starts slow but stick with it, its worth it!

Surprisingly good CGI (Matrix esq) with plenty of believable future concepts thrown in, good characters, well acted and a solid story. Loved it and already recommended it to friends

I can this becoming a B movie cult favorite.

Upgrade plays with an interesting new landscape for both director Leigh Whannell and the Blumhouse studio. For what could’ve been a rather simplistic sci-fi buddy action picture, Whannell has a lot of fun with the concept that he takes it to all sorts of unique areas. There’s an astuteness to the advancements and fears of technology, encroaching in ways that are mostly unseen behind the subtlety of societal improvements. There’s great grit its horror element, where bad guys receive from rather bloody beatings where faces are slit and jaws are cracked open. And there’s plenty of dark humor to be had with an artificial intelligence stuck in your head trying to call the analytical shots.

The cyberpunk story seems to exist in a world that is just one or two advancements away from the glossier and grosser future of Blade Runner. Cybernetics are becoming more common, self-driving cars seem to be in their beta stage, and virtual reality is quickly becoming the new cocaine. Grey Trace (Logan Marshall-Green) is a bearded mechanic of this world who seems to have a good life with his wife Asha (Melanie Vallejo). He works for a company that deals in cybernetic augmentations with one scientist that is developing a revolutionary new chip that can maintain basic human functions of the body.

That comfy life is ripped away when Grey is ambushed by some nasty men, has his wife murdered, and his spine damaged to make him immobile. He has no clue who did or why and neither do the police. Luckily for Grey, the eager scientist is willing to give Grey a test of his latest chip that can allow him to walk again. It’s astounding enough that Grey can walk but he then makes a greater discovery; the chip can speak to him mentally. And, upon Grey surrendering his will to the machine of his body, he can become an effective killing machine. This comes in very handy for Grey’s path of discovery and revenge, tangling with all sorts of violent men that led to the death of his wife.

These fight scenes are a real treat both for Grey’s banter with the voice in his head and the extremely ouch-worthy kills he doles out. Though Grey has no control of his body while defending himself, he still gets to react to how brutally he savages one guy in his kitchen, genuinely begging the attacker to please stay down to avoid another beating. Another interesting advantage: Grey can turn off his pain receptors so that when the hitmen think they’re torturing an immobile man, they’re really just poking a cybernetic bear that will soon rip their faces up. Or, as in a barroom brawl, deliver a series of slashings to the face.

There’s a slickness to Upgrade that always feels exciting. Just watch the kitchen fight scene alone to see an amazing use of following shots that distorts the perspective of the character and makes great use of reflections and shadows. Many interesting quandaries are posed about the nature of technology, asking how long we intend to deceive ourselves of letting automation take the reigns of our body before it takes everything. It doesn’t take a cybernetic genius to see this monotone voice will eventually go all HAL 9000 on Grey but it’s still a lot of fun to watch, especially for actor Logan Marshall-Green doing double-duty appearing both tough and terrified in fantastic action sequences.

Upgrade is the type of science fiction you don’t see too often from a director and studio you wouldn’t normally expect. For a film all about a scary future, the future of Blumhouse looks rather bright with productions such as these that tinker with different concepts that boast bigger topics of artificial intelligence while still embracing the boldness of horrific violence. In its own dark manner, right up to the surprising and dread-worthy ending, Upgrade is cleverly entertaining.