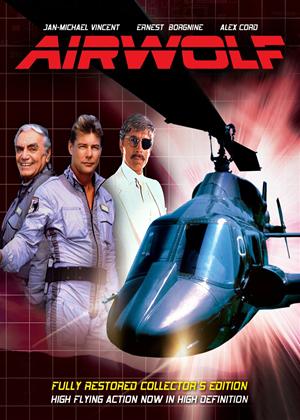 Sign up
Suppose They Gave a War and Nobody Came?

Not released
The Adventurers

Not released
Another Harvest Moon

Not released
These Amazing Shadows

Airwolf Series 4 gets a rough time from fans and general viewers, even now. Well, I loved it.

To quickly go through the details - due to the expense, behind-the-scenes issues and sinking ratings, Airwolf was laid to rest at the end of Series 3, only to be resurrected again with a diminished budget, all-new cast and no access to the original Airwolf helicopter. This latter restriction was the biggest problem for me - the sequences involving the 'copter flying were either used from earlier series, or from previously filmed unused footage. The weather in these sequences is bright and sunny, and beautifully filmed, whilst the newly recorded footage for Series 4 was filmed in a different location (Vancouver) in often cold, rainy conditions. The contrast remains jarring throughout.

Only original cast member Jan Michel Vincent remains for the first episode. He puts in a great final performance, despite looking a little haggard, and his character String is written out in such a way that the viewers don't know whether he lived or died - which is a detail I rather liked. Ernest Borgnine is represented by a body double filmed from behind, who perishes minutes into 'Blackjack', the first episode - Alex Cord and Jean Bruce Scott don't appear at all.

'Playing' with established continuity, String's brother Saint John Hawke appears and becomes the new lead character. Barry Van Dyke is big and beefy with a jawline to die for - he looks as if his character might be an arrogant posturer, but he isn't. He and the other three new regular cast members are appealing and well-played.

It's true to say not all of the special effects work - Airwolf's new laser looks very cheap, for example, and a couple of the stories are unnecessarily slow-moving. This could also be true of earlier series, however - and I enjoyed the majority of these episodes a lot. Intrigue, a bit of romance, camaraderie, explosions, jeopardy - it's all here, not packaged in as polished a way as previously perhaps, but there's still much to relish. Possibly my favourite episode is 'Malduke', featuring Dick Van Dyke, Barry's dad, as the titular villain. It's as a good as anything under the 'Airwolf' banner.