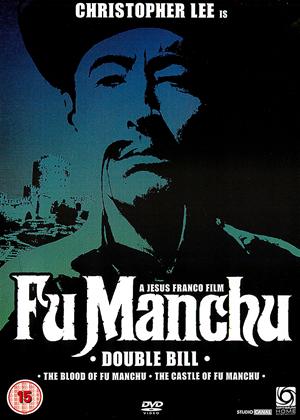 Synopsis:
Fu-Manchu (Christopher Lee) is an evil mastermind, hell bent on taking over the world and enthralling it to his will, with the help of the fanatical Su-Fan sect and a rogues gallery of allies loyal to his diabolical cause.

The Blood of Fu-Manchu
Fu-Manchu hatches a scheme to subjugate all the nations of Earth with a machine that can freeze all the world's oceans potentially unleashing untold death and destruction.
The Castle of Fu-Manchu
Fu-Manchu returns with another plot to take over the world, this time using a bevy of beautiful women to administer a deadly poison to ten world leaders.
Actors:
Christopher Lee, Richard Greene, Shirley Eaton, Howard M. Crawford, Maria Perschy, Günther Stoll
Directors:
Jess Franco
Studio:
Optimum
Genres:
Sci-Fi & Fantasy, Thrillers
Countries:
Germany, Sci-Fi & Fantasy, Thrillers

… in which prolific Spanish Director Jess Franco gets his hands on what had become something of a franchise, with three previously released films meeting with some success. Also known as ‘Fu Manchu and the Kiss of Death’, ‘Kiss of Death’, ‘Kiss and Kill’ and ‘Against All Odds’, this is either the fourth in the Fu Manchu series, or ‘just another Franco film’, depending on your point of view.

Franco is an odd choice of director for this – his style thus far (and increasingly throughout the 1970s) was far from that of a straightforward horror/adventure auteur. Personally, Fu Manchu’s appeal has mostly escaped me, although I found the perverse relationship between Fu and his daughter Fah Lo See (Myrna Loy) very interesting in 1932’s Boris Karloff-headed ‘Mask of Fu Manchu’. Other than that, he’s always seemed a pretty one dimensional villain pursued by a dull British nemesis.

As that nemesis, Richard Greene here plays Nayland Smith with applicable stoic decency and blandness, until he quickly succumbs to Fu’s latest machinations: a pretty young woman has been sent to him infused with poison from a venomous snake. Once kissed, Smith – along with ‘nine other of Fu’s greatest enemies’ – goes blind, and subsequently, it is hoped, will die. Due to Fu’s ‘genius’, the women are not infected by the poison and are simply carriers.

While Christopher Lee is imperious and crisply spoken as Fu Manchu, Tsai Chin as daughter Lin Tang is rather more interesting. Her perverse delight in torture – something you would expect Franco to exploit – is too briefly featured, as is she, which is a shame. Instead we get many long scenes full of characters who have nothing to do with the ongoing plot - bandits, jungle attacks etc. Interest begins to wane.

Actress (and 60s sex symbol) Shirley Eaton pops up for two minutes as ‘The Black Widow’. The scene was spliced in from another film. Shirley not only claims she was not paid for this, but didn’t even know of her inclusion for years.

Christopher Lee and Tsai Chin are effective in under-used roles, indeed they are the highlights here (although Howard Marion-Crawford is good fun as Dr. Petrie). The story is uneven, the pacing very laboured and thrills few and far between. I love many films from Jess Franco, but his style is wholly wrong for this kind of adventure, I think. 94 minutes has rarely seemed so long.