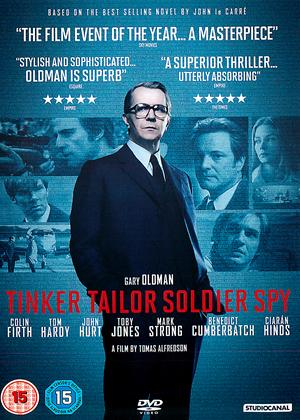 Perhaps if I didn't know the novel, or the late 70's TV production of Tinker Tailor, I might have thought this ok. Even so, its sepulchral gloom made me think more of a cut price Blade Runner than Le Carre's miserable mandarin. Oldman did a fine job, all the actors did a fine job with a script that became more attenuated as the film progressed. Why needlessly conflate characters' names, and why make Ann Smiley, an integral part of George's malaise, an off screen signifier? I'd been really looking forward to seeing what a contemporary director and cast made of what is now almost an English classic, but found myself deeply disappointed

Regrettably, this is a film which suffers badly in comparison to the 1979 BBC TV production. Having enjoyed the book and the TV series I was looking forward to the film, particularly after its glowing reviews from the critics. Well, I was disappointed. Knowing the material I wasn't expecting an action/adventure tale, but what is a complex tale has been so condensed as to make the story not only slow moving but incomprehensible unless you have read the book. Despite excellent acting, the missing back story makes the plot hard to follow.

Before writing this review I re-watched the BBC TV series with Alec Guinness in the lead role just to make sure that I wasn't misremembering how good it was. Yes, that one is slow moving too, but it is so atmospheric that it draws the viewer in to see how the story unfolds – and it makes Gary Oldman look out of place as George Smiley, a role which (despite others playing the character over the years) Alec Guinness made his own.

The TV series also has the luxury of being over 5 hours long, giving plenty of time to set out the complex story, the complex characters and the complex background. The film is also long at over 2 hours – and it feels it, whereas the TV series becomes all-enveloping and the viewer becomes immersed in the story.

Sorry, but I can only give this one 3/5 stars – and if it hadn't been for Gary Oldman's performance it would have been 2/5.

I have not seen the Alec Guinness version or read the book, so I was coming to this "fresh" so to speak. I had expected more with the film being so heavily awarded and nominated for awards. Despite squeezing a long and intricate story into 2 hours, there were still times when it really dragged (I remember some bits which were just an excuse to play a whole song, to link it in to the era). Gary Oldman did well with what he had, but I don't remember any aspects of what he did that made me think "gosh he's acting this well". A host of british acting talent, all wasted as far as I could see.

Not a patch on the original - Tinker, Tailor, Soldier, Spy review by George

I thought it would be interesting to view this and compare it with the original. Like most remakes (why doesn't the film industry go for new ideas, not rehash old ones?) it wasn't a patch on the original in so many ways. Alec Guinness was sorely missed, the film dragged and just didn't convince. It was a feeble imitation and really not worth viewing.

The original book was fine, but this version was virtually incomprehensible.   It included a number of interesting scenes, but understanding the plot was way beyond my ability, and apparently beyond the brainpower of a good many people.  Director's ego trip ?

Based on the best selling novel by John Le Carre Tinker, Tailor, Solider, Spy follows the story of British spy George Smiley as he attempts to find a mole within the intelligence service.

Older audiences may well have seen the excellent BBC adaptation of the novel that starred Alec Guinness, which has since gained status as one of the BBC’s best adaptations. Considering the amount of time allowed for the older project compared to this year’s release audiences should be very impressed with the new offering.

Starring a wealth of British big shots including Colin Firth, Benedict Cumberbatch, and Toby Jones, and an excellent performance by the endlessly versatile Gary Oldman in the lead, Tinker, Tailor, Solider, Spy is a tense and beautifully executed drama.

Some have complained that they could not get along with Cumberbatch in the role of Smiley’s leg man Peter Gulliam, otherwise however the film must be praised for its vision of the piece. I was very struck by the sight of London and Cambridgeshire which demonstrate the tactful and precise choice of location to stay in keeping with the original setting. Whilst the industrial style set pieces of the Circus give the movie a twist of modern style.

The film manages to cut only what is absolutely necessary without distracting from the story and effortlessly hold suspense throughout, even fans of the book and the original BBC drama should not be disappointed.