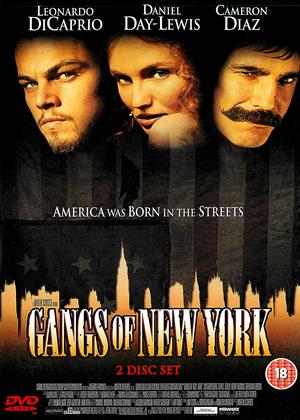 Reviews (1) of Gangs of New York

This is a film about the criminal underworld in New York city, between about 1845 and 1875. A gang of 'natives' (i.e. Protestant Americans of English origin, from what we are given to understand), led by a sadistic criminal called The Butcher (Daniel Day-Lewis, utterly scary and realistically portrayed), is fighting it out with the Irish immigrants, who are despised because they are new arrivals in the city and Catholic. This happens against the backdrop of the American Civil War and the issue of slavery. A good deal of it is based on historical facts.

The acting is good and Cameron Diaz is surprisingly convincing as the female lead in the story, who is a talented thief herself. The film sets look a little bit cardboard-like at times, I must say (it was filmed in Cinecitta, in Italy, I believe). And there is a lot of extreme violence, mostly involving knives and meat cleavers, so, it is not a film for the faint-hearted.

Having said all this, there is an epic and symbolic dimension to the movie that does make it relevant and captivating, also because the lead characters are unusually complex for a story of this kind. I certainly recommend the movie, which you will not forget.