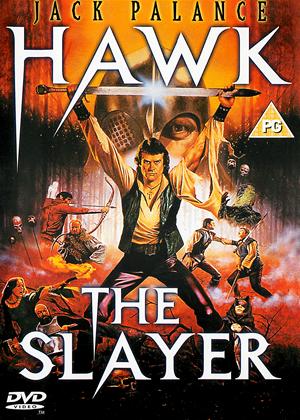 Reviews (1) of Hawk the Slayer

‘Hawk the Slayer’ is a modestly budgeted sword-and-sorcery horror that has garnered a cult following and the promise of a number of sequels that have yet to materialise. The ending certainly indicates that the story is not yet over …

The cast is a very good one: Jack Palance delivers a typically enthusiastic performance as the half-faced Voltan, and there’s Bernard Bresslaw, Patricia Quinn, Christopher Benjamin, Annette Crosbie, Shane Briant, Roy Kinnear, Harry Andrews, Patrick Magee - and John Terry as the very earnest Hawk. Many of these were very familiar faces on UK television at the time.

I remember reviews at the time being scathing, and now it is viewed rather patronisingly as ‘so bad it is good.’ I’m not at all sure either is fair. It is very ‘of its time’, directed (and co-written, by Terry Marcell) very much like a television project and features a terrifically cheesy soundtrack (by Harry Robinson) reminiscent of Jeff Wayne’s ‘War of the Worlds’. It is played with gusto by the cast and features some mystical-looking locations and sets, often enhanced by the mist from an ever-present smoke-machine. The effects aren’t always impressive, but there is a sense of infectious, sly humour throughout that discourages us from taking things too seriously. So if you laugh at this, it seems to me, you’re laughing with it rather than at it.

With such an eccentric mix of characters and a ranting, spitting, snarling villain, it is perhaps inevitable that Terry’s ever-stoical hero is the blandest of them all. Yet other players flourish – Giant Gort (Bresslaw) and Baldin the dwarf (Peter O’Farrell) share such a good rapport, for example, ensuring that Palance isn’t allowed to entirely overshadow everyone else.