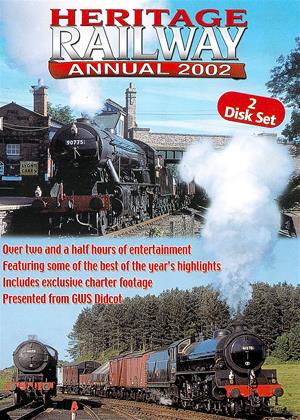 Synopsis:
This special annual video is a compilation of events in 2002, encompassing some of the best action on private heritage railways as well as the main line. Presented from Didcot, home of the Great Western Society by Heritage Railway publisher Paul Appleton, the programme is crammed full of features to entertain heritage railway enthusiasts of all persuasions and interests. Features include the Severn Valley Railway's autumn 2002 gala where no less than three main line Pacifies were in action, including No. 6233 Duchess of Sutherland, No. 6201 Princess Elizabeth and the line's resident A4 No. 60009 Union of South Africa, as well as many of the other engines in operation over the weekend. No.
6233 is also seen on Royal Train duty on the North Wales Coast main line and we witness the return to steam of No. 6201 earlier in the year. At the North Norfolk Railway, a special Golden Jubilee week of celebrations took place with former LNER B12 No. 61572 and LNER-designed B1 No. 61264 in action. Later, in the summer of 2002, the line's J15 No. 65462 was returned to steam and is seen in action on home territory as well as at the nascent Mid-Suffolk Railway at Wetheringset. Spectacular main line footage from Scotland is witnessed as the ex-LNER pair of K1 No.62005 and B1 No.61264 double head on the West Highland line, including sequences crossing the remote Rannoch Moor. The Great Central Railway has a reputation for hosting some of the finest locomotives in preservation and during 2002 we can see Ivatt 2MT No. 41312, GWR 2-8-OT Nos. 4247 and 5224, BR Standard Nos 75014 and 80104, WD 2-10-0 No. 90775, LNER V2 No. 60800 Green Arrow and USATCS 160 No. 5197 all in action as guests at the Loughborough-based line Classic diesel power is included too, with action from the Midland Railway Centre and the North Yorkshire Moors Railway. Narrow gauge coverage is provided in the shape of recently re-commissioned Welshpool and Llanfair Light Railway No. 823 The Countess, returning to steam in time to celebrate its centenary with No.822 The Earl in 2003. A very unusual and exciting project is planned for the Ecclesbourne Valley in Derbyshire, where supporters of Wyvern Rail are making great strides in their aim to reopen the eight and half miles-long line to the main line at Duffield Junction, along with the various industrial branches that radiate from Wirksworth station. There is also a round up of many of the other locomotives that have returned to steam during 2002, including ex-L&YR/LMS 'Ironclad' No. 52044 (K&WVR), Beattie well-tank No. 30587 (Bodmin and Wenford), LNER B1 No. 1306 (Nene Valley) and LMS 'Fairburn Tank' No.42073.(Lakeside and Haverthwaite), plus the first 'new-build' of the 21st century, the 'Steam Elephant' replica at Beamish. Between each feature we meet the volunteers and staff at Didcot Railway Centre and look at the extensive collection of locomotives in their authentic GWR motive power depot setting, including coaling tower, running shed, turntable and restoration shed, where several projects, including Saint and Firefly 'new-builds' are seen in progress. The centre also has two running lines, including the reconstructed 'branch', an extensive signalling system and the broad gauge transfer shed, where mixed gauge trackwork can also be seen. This two and a half hours-long programme is a 'must' for heritage railway enthusiasts everywhere.
Actors:
Paul Appleton
Narrated By:
Paul Appleton
Studio:
Heritage Media Digital Productions
Genres:
British Films, Documentary, Special Interest
Countries:
UK

Sign up
A Not So Silent Night: Rufus/Martha Wainwright and the McGarrigles

Sign up
At Home with the Georgians: The Complete Series