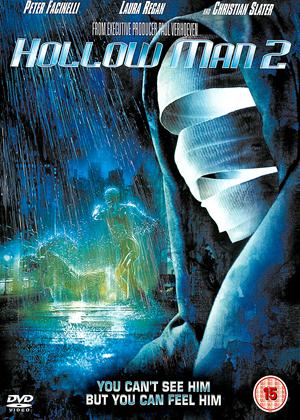 I thought I would give this a go, after spotting an advert for it in a well-known UK film magazine. I knew Hollow Man 2 was in production, and as a fan of the first movie I was a little non-plussed to find the sequel getting a Direct-to-DVD release.

So I wasn't really expecting much...

I was pleasantly surprised therefore to find an engaging little movie - very much in the spirit of the first (no brain, no logic, full speed ahead with cardboard characters and a plot straight from the back of a 40-year-old comic). It has many faults - Christian Slater just ain't up to the job any more (but seems to be enjoying himself), a long and overly-talky middle act, some extremely ropey visual effects (though it has to be said that there are many good ones despite the obviously low budget), a blatant re-use of a scene from the original Hollow Man not-very-well-disguised, and a conclusion that felt very rushed - dare I suggest the budget ran out?

On the plus side however the 2-dimensional characters are engaging, there are one or two great jump-out-of-seat moments, tips of the hat to not only the original movie but also HG Wells' novel "The Invisible Man", effective use of music (which is all new - not a rehash of Goldsmiths original) and an overall sense of fun (That's Executive Producer Paul Verhoeven shining through, I think) - despite the nasty moments!

To the people that are slating this saying "It's not as good as the first, really disappointed" etc etc, I simply have to wonder exactly what they were expecting! Shakespeare this ain't...

But to the people who are open-minded enough to give this an honest go, you will get out exactly what you put into it. It's not Shakespeare, but it certainly is Hollow Man.

If this is the future for the Hollow Man franchise (there is the obligatory - but well executed - set-up for a Hollow Man 3), it could be an awful, awful lot worse.