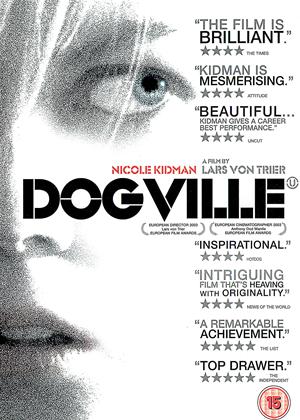 Synopsis:
Grace (Nicole Kidman), a beautiful fugitive on the run, hides in the isolated town of Dogville, where she goes to work in return for protection. But when the mob tracks her down, the town suddenly demands a better deal, and she learns the hard way that in Dogville, goodness is relative. But Grace has a secret and it is a dangerous one. Dogville may regret it ever began to bare its teeth...
Actors:
Nicole Kidman, Paul Bettany, Lauren Bacall, Harriet Andersson, Jean-Marc Barr, Blair Brown, James Caan, Patricia Clarkson, Jeremy Davies, Ben Gazzara, Philip Baker Hall, Thom Hoffman, Siobhan Fallon Hogan, Zeljko Ivanek
Directors:
Lars Von Trier
Voiced By:
John Hurt
Writers:
Lars Von Trier
Studio:
Icon
Genres:
British Films, Drama, Thrillers
Countries:
UK

What I Like About New Movies
15 films by cinemadiso

This is not a easy film to watch. The stylised direction and cinematography is more akin to watching a play at the theatre, and whilst I expected to be able to 'dial this out' as the film went on, I was never really able to do so.

It's also a film that deals with the base nature of humanity in a way that escalates to a horrific and disturbing ending.

My wife hated it. But I was left with a deep, uneasy feeling after the film and it stayed with me for quite some time - so I suppose it did its job extremely well.

Like I say, hard to watch and a little too stylised for my tastes, but a good film nonetheless.

My film of the century so far. Another masterwork from Lars Von Trier, the uber-director. Don't expect action here and don't even bother if you have a short attention span. One of the most fascinating, captivating studies of human behaviour I have ever seen in film.

Don't Do it! - Dogville review by CP Customer

I can't stop thinking how bad this film was!!

Didn't watch more than 5 minutes of it

2 out of 10 members found this review helpful.

As you can see from the reviews, this one will divide audiences- some will loathe its stagy feel and preachy script and will find it hard to love the imagine-it-yourself set, complete with actors pretending to open and close non-existent doors. Even so, you’ve got to hand it to von Trier- it takes guts to sell this concept to high-rolling actors and producers and he ultimately delivers something fresh, original and completely unlike the stuff we see every week. Shame so many people hated it!

One of the best films ever made. The sparse staging and set is off-putting at first but by the end it somehow does not matter. Excellent acting, It forces you to consider more carefully where you stand on issues of morality and justice by exposing our inherent, and often sub-conscious, bias as people.

There is little I can add to the reviews that have gone before, except to say that it was the best last line of a film I've ever heard.