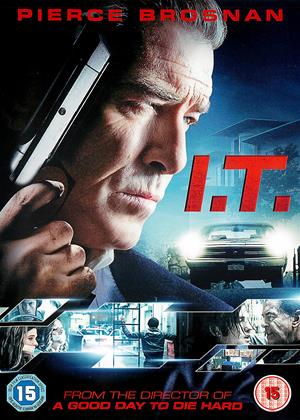 Creepy IT expert takes a fancy to his boss’s (Pierce Brosnan’s) teenage daughter. Pierce gives him the brush-off. Mistake. Cue an engrossing thriller that’s also a commentary on the dependency of modern society on computers and hackable personable data: financial records, social media, medical records, even a hi-tech house and car. Can Pierce fight back as his life is pulled apart by the IT guy?

The film was unfairly panned by critics but it’s a terrific premise whose pace never lets up. It has no pretensions to being other than a good tense thriller, but in that it succeeds admirably. John Moore directs with visual flair and Timothy Williams contributes a thumping score. Well worth a look.

A silly and unengaging film - I.T. review by RD

I guess this is not one of Mr Brosnan's best films. He tries a sort of Hollywood-Irish accent throughout that is so odd it's funny. Not a good basis for a tense thriller.

The plot is very simple, and I mean simple, with dialogue and screenplay that don't ever grow up despite the huge amounts of violence. Each scene is so implausible that you really can't get too involved and it never really raises itself above a collection of paper-thin characters making very stupid decisions throughout the whole film.

At least it doesn't go on too long, and there's a car crash and shootings to brighten things up, but very little else. I'd class it as an immature third rate thriller.

This was a comically awful film, with particularly terrible acting from Frecheville. Thank god I was doing a jigsaw pizzle at the same time as watching it, so I didn’t completely waste 92 minutes of my life.

I.T. is directed by John Moore and stars Pierce Brosnan in the main role. In it, there is something about hackers, there are some thriller elements sprinkled in there for good measure, and there is some other unremarkable stuff as well. The problem with I.T. is twofold: the first one being is perfect mediocrity that makes this film as unremarkable as it can be; the second problem with I.T. is that the screenplay feels underdeveloped and somewhat lacking. Combine these two issues and you have yourselves a modern Pierce Brosnan film (whose recent role streak isn’t that stellar to begin with). Despite all of that however, I.T. can be somewhat enjoyable at times, and that’s pretty much everything this offering, well, offers.

The film follows self-made millionaire Mike Regan (played by Pierce Brosnan), who launches the present-day app equivalent of Uber. During one of his presentations however, his app descend into glitch-mode, but luckily there is a new IT guy to fix it before it causes any damage. This guy’s name is Ed Porter (James Frecheville), whose incredible knowledge is overshadowed by his mysterious demeanor and toppled by his mysterious past.

After he saves Mike’s presentation, Mike invites Ed over to his home and introduces him to his family – his wife (played by Anna Friel) and daughter. While there, Ed quickly fixes the wifi, tackles some issues with the home security system, and even fixes a serious GPS error in Mike’s car. Soon, Ed is Mike’s go-to guy for all things IT-related.

However, Ed is slow to pick up social cues and thinks he and Mike are BFFs. And not only that, but he thinks he’s also entitled to a romantic relationship with Mike’s 17-year-old daughter at that. Soon, Mike quickly shuts down Ed’s numerous advances and gets him immediately fired.

Then, Ed reveals himself as a heavy drug user whose mind has simply gone. He also takes this rejection very on a very personal level and uses his logins to Mike’s property to cause irreparable damage. The angrier Mike gets, the more menacing Ed becomes, and this goes on in circles until, well, you can pretty much guess what happens at this point in the film. Needless to say, I.T. doesn’t end up happily for all characters involved – and that’s simply how these thrillers go.

I.T. offers very little originality or anything other than artificially inflated tension creative-wise. It’s a perfectly mediocre film for a perfectly mediocre afternoon with your significant other. If you’re not too fond of reading a book on those lazy afternoons, then I.T. may very well be the perfect media product to satiate your cravings for entertainment.