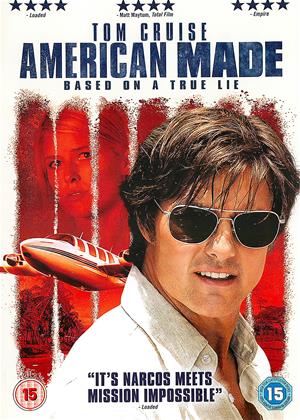 Reviews (17) of American Made

Based on a true story, the lid is lifted on the murky world of CIA Latin America involvement in the 80s. Even American law enforcement agencies don't know what they are up to. This film is an education for those open to that possibility; if you see it as a only thriller or judge it as entertainment, you have probably missed the point. It is entertaining, but it does leave you with a lot to think about.

As long as the CIA's recruit (Cruise) delivers what they want to undermine communists in Latin countries by smuggling guns to friendly forces, drug smuggling on the side is turned a blind eye to. Eventually it becomes the main event for Cruise's character as well as America. A lesson in governmental agency skulduggery! Enjoy.

This is what I call a good “Friday night” movie. It’s fun and you don’t have to concentrate too hard.

Tom Cruise is very good, although you must approach the story with a pinch of salt .

Just don’t think of all the sad stories associated with the drugs and guns that are shipped all over South America.

Funny but chilling - American Made review by Champ

On the surface, this was a fairly outlandish romp, with Cruise perfectly cast as the pilot with the million dollar smile and negotiable morals.

But the laughter freezes a little when you realise that most of this actually happened! The killer moment for me was seeing Nancy Reagan on TV with her "Just say no" message, while her husband's government is actually helping import cocaine.

I thoroughly enjoyed this, and rate it nearly has highly as The Big Short, which made me feel much the same.

Great movie for a night in.

Enjoyable film, easy watching, good story that never gets complicated so you can just chill out relax and enjoy. Tom Cruise is on top form too.

Good film, but beware the language - American Made review by Ken

Nothing extra to add to what others have said about the film itself - it's well made, well acted and an engaging story. But, it you don't want to hear the "F" word over and over again, be warned, there's a lot of it.

Entertaining - American Made review by KB

I would rate this 3 & a half . Cruise is good in this . I much prefer him in a film like this as opposed to franchise movies like mission impossible which I am not interested in . Cruise makes this film his own & it held my interest all the way through & is very watchable .

entertainment - American Made review by OP

I agree with the reviewer who described this as as good entertainment and a Friday night film! Very watchable and quite gripping in parts. The acting is great and Tom Cruise is superb in the part.

Not as good as Blow - American Made review by NC

Blow was the distribution side true-story with Depp. Both films tend to do a Billy the Kid or Jesse James pastiche.......glorification of making easy money out of the huge misery and vice associated with the drug industry.........not heroes. Not even nice people. After a long, and self indulgent , innings, they got their just deserts. Although the Depp guy was luckier to spend many years behind bars.............

How does Tom do it? - American Made review by TR

A real star vehicle for a bona fide star. Cruise sweeps us along from beginning to end with his usual charm that he pulls off time and time again. Even though Seal's family are just supporting players and difficult to either relate to as real people or sympathise with, that just throws the central character of Barry Seal into even greater focus, and boy, does Tom Cruise do him justice, with no attempt to portray him as a good egg.

Good old fashioned action entertainment which doesn't degenerate into either a CGI fest or a moralising lecture. Recommended, Cruise back to his best.

Fun Friday night in - American Made review by JZ

This a really fun film. Well acted. Unreal to thing this is based on a real story. Watch the special features! Acting is great. Tom Cruise is superb but so are the others so it's not a one man band. Tom Cruise does all the flying himself. Interesting to see how even someone in a great job with great family life wants more. So interesting moral tale. Dont take it too serious. Have fun with it.

American Made (aka Mena) review by Mark McPherson - Cinema Paradiso

American Made is the type of film that tries harder to portray that messy and immoral actions of the drug trade and contra training as more amusing than depressing. Barry Seal was one such figure caught up in the struggle because of his stupidity, greed, and cockiness. He records himself in the twilight days of his career, realizing his death is imminent in the hands of a cartel. In these recordings, his smile is still present, remarking that America is the best damn country in the world. Well, you know, for a country that screws you over when things go south.

So the familiar story goes, Barry (Tom Cruise) was a 1970s commercial pilot that made some extra money on the side by smuggling Cuban cigars. He is soon contacted by CIA agent Schafer (Domhnall Gleeson) about working with the CIA to fly over Central America and snap some photos of potential threats. The CIA will supply Barry with his own flight agency and jet. He can accept the job or they throw him in prison. Naturally, he takes the position, not thinking twice about the CIA’s lame name for the business that is a backward anagram of CIA. He gets shot at a few times, but, hey, he gets a cool plane.

Eventually, Barry is discovered by Central American cartels, and they give him some options: smuggle cocaine into America for them or die. Naturally, he takes the job and ends up making more money. After all, the CIA is trying to keep their hands clean of Barry, instantly prepared to deny any involvement with Barry’s dealings. New plans come in from the CIA: train contras secretly in a US town or go to prison. New plans from the cartel: smuggle more cocaine or suffer a quick death. Nobody can help Barry. He is trapped. But, wow, does he look like he’s having too much fun to notice, right? Nothing says fun like crashing a plane full of cocaine in a neighborhood and making your getaway on a bike with powder all over your face.

Barry has a family, but they serve as little more than side attractions and outside reasons for him to keep going. I couldn’t help but think of how Martin Scorsese would direct stories of figures that rise and fall, treating the families as real people and giving at least one shot to focus on the fact that children are innocent observers of our bad behavior. Doug Liman’s direction forces them far into the background, acting as something for Barry to throw money at. His wife (Sarah Wright) demands appliances for their new home, and he literally throws wads of cash at the situation. His brother-in-law (Caleb Landry Jones) presents a problem with his indigent expenses and illegal activity, but Barry tries to solve the problem with more money.

Parts of this farce work, even if I didn’t want them to. There’s a lot of humor that Liman tries to evoke out of Barry’s wild story and some of it is amusing. Barry has his moments where the farce becomes so over-the-top you have to laugh a little, if only to shake the unpleasant feeling of cartels and the CIA running our country no regard for human life. There is so much money coming in that Barry has to launder it within new businesses and bury it in the backyard. The cartels begin to accept him as one of their own and invite Barry and his wife to crazy parties. The local authorities are sniffing around Barry’s activities, leading to them all converging at once to arrest him.

Despite how much fun this sounds, including a scene where Barry and his wife have sex while piloting a plane, it all plays on a reasonably predictable track. There are the expected highs and the dour lows of such a story, all told with that trademark Tom Cruise grin. Barry Seal’s story is a wild one, but perhaps not as fun as Liman or Cruise wants us to believe. Rather than question the idiocy that led to this messy operation of drugs, contras, and cartels, American Made seems content to just kick back its feet and marvel at the craziness of it all. There’s a sick feeling that washed over me at the end of the picture, and it’s not just the corruption presented in the film; it’s the filmmaking that treats inept leadership of real stories of real lives ruined with farcical tones, all set to the tune of the 1970s greatest hits.