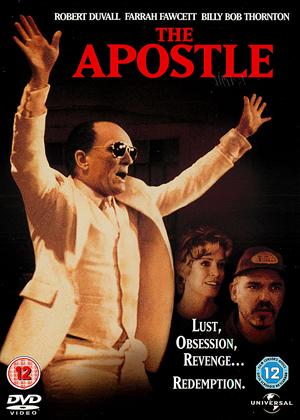 Reviews (1) of The Apostle

Christ on a bike!!! - The Apostle review by Count Otto Black

I can see why Robert Duvall got an Oscar nomination; this is a tour de force of his acting skills, which are considerable, to the extent that it's almost a one-man show. The trouble is, I absolutely loathed the character he was playing. I'm not a Christian, but I enjoyed the recent Irish movie "Calvary" because the protagonist was a good though not perfect man trying to be absolutely unselfish and do what he genuinely thought was the right thing under almost impossible circumstances, and ultimately his religion mattered far less than his sincere attempts to good in the face of a relentless barrage of evil. Also, that film was intelligent enough to understand that a situation this melodramatic works best as a comedy, even if it's a comedy so black that many viewers won't think it is one.

The man we're obliged to spend over two hours with here is a monster. For a VERY long section at the start, he literally cannot shut up for one minute, and frequently one second, and appears to have Tourette's Syndrome, only with all the involuntary swearing replaced by the word "Jesus". I was reminded of Graham Norton's hyperactive, irrepressibly cheerful, and incredibly irritating priest on "Father Ted", except that nobody in this film seems to notice that our "hero" is both annoying and insane, except his wife, whose understandable departure results in the act of shocking violence for which he spends the rest of the movie being redeemed.

Unfortunately, this is a brain-dead happy-clappy Christian Fundamentalist idea of redemption. I honestly couldn't tell whether the moronic scenes of "tag-team preaching" (that really is what it's called, according to the credits) were meant to be a slapstick parody of true religion, or whether the scene where a crowd repeatedly raise their right arms and shout "Jesus!" in unison was supposed to resemble a Nazi rally, but I suspect they weren't.

Almost the entire cast appear to be extremely stupid, and utterly ruled by primitive ritual behavior which in many scenes they constantly reinforce by dragging Jesus and God into literally every sentence, and our noble, holy, and pathologically attention-seeking hero hardly ever really tries to helps another person in any way, unless you assume that ranting repetitively at everyone in sight until they succumb to social pressure and join in the mindless collective hysteria is the ultimate help you can give to anybody, since it means they won't go to Hell. If you're a rabid Baptist, you probably think this is indeed the case. If you're not, this film is all about a man who ought to be on major tranquilizers shouting "Look at me everybody! And that includes God!"

It may be that it really is as subversive as I sometimes felt it just might be - the very last scene before the credits roll is surprisingly reminiscent of the ultimate fate of that unbearably annoying "Father Ted" character who we last see still being relentlessly upbeat despite being buried under large rocks. But if so, they were afraid to offend anyone by doing it properly, and the subversive subtext is little more than a few in-jokes, if it exists at all. This is a scary portrayal of how easy it is for crazy people to gain followers just by sounding incredibly sincere about meaningless cult jargon, especially if they shout a lot. And the scariest part is that I don't think it's meant to be.