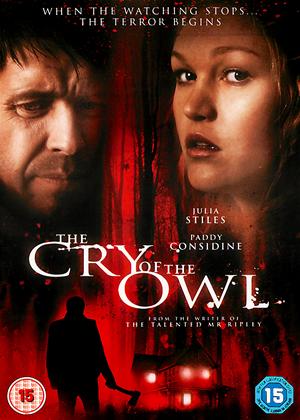 Rent other films like The Cry of the Owl

Paddy Considine is one of my favourite actors but this is one film of his that I hadn't seen. Certainly it never passed my local cinema - perhaps (unjustly) it went straight to DVD?

It's based on a novel by Patricia Highsmith and the reference to the owl is as a harbinger of doom. That sounds very pretentious, and the film does suffer somewhat from a sense of its own importance.

The story is one of stalking in reverse. Robert Forrester (Paddy Considine) works for an aerospace company, but after a bitter divorce becomes obsessed with Jenny Thierolf (Julia Stiles) and spies on her. Strangely, she invites him into her house, then breaks off her engagement and starts to stalk Robert, who distances himself from her. There is a fight between Robert and the ex-fiance, the ex is left on a riverbank but disappears, and Robert becomes a murder suspect. Things go from bad to worse and Jenny ends up killed. Perhaps Robert really is a harbinger of doom?

It sets out to be a psychological thriller - but misses the target. There aren't any thrills, what psychology there is is bogus, and there isn't really much drama either. So it must be pretty bad then? Well, I rather liked it - but it could have been so much better. And I think that falls to the choice of actors. There just isn't any chemistry between Paddy Considine and Julia Stiles [Aside: they both appeared in 'The Bourne Ultimatum', but not together] and frankly Paddy doesn't have the looks for this part.