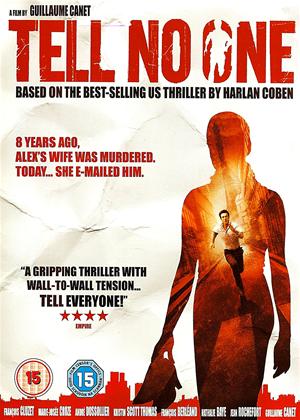 Synopsis:
Relentless edge-of-your-seat suspense, jaw-dropping, high-octane action and a powerful love story combine in what has been hailed by many critics as the best film of the year. Tell No One follows one man's frantic race against time when his tragic past is suddenly and unexpectedly unearthed. Dr. Alex Beck is left unconscious after his wife, and childhood sweetheart, Margot is brutally murdered. 8 years on and still unaware of the truth, Alex receives an anonymous e-mail. Clicking on the link he sees a woman's face in a crowd - Margot's face...
But before this can sink in, Alex is thrown headlong into a deadly chase - running from both the Police and a team of killers who will stop at nothing to keep the truth hidden.
Actors:
François Cluzet, Marie-Josée Croze, André Dussollier, Kristin Scott-Thomas, François Berléand, Nathalie Baye, Jean Rochefort, Marina Hands, Gilles Lellouche, Philippe Lefebvre, Florence Thomassin, Olivier Marchal, Guillaume Canet, Brigitte Catillon, Samir Guesmi, Jean-Pierre Lorit, Jalil Lespert, Eric Savin, Éric Naggar, Philippe Canet
Directors:
Guillaume Canet
Writers:
Guillaume Canet, Harlan Coben
Aka:
Ne Le Dis A Personne
Studio:
Revolver
Genres:
Drama, Thrillers
Countries:
France, Top 100 Films, Drama, Thrillers

C'est magnifique!! - Tell No One review by Kurtz

When it comes to films, the French can sometimes be accused of putting the "f" in "art", but they also have a yen for the hard-boiled crime thriller, and this one, based on a Harlan Corben story, delivers in spades. You get good cops, bad cops, shady underworld allies, "Argh!You've got the wrong man!" moments, a couple of messy murders, jaywalking as an art form and a gruelling chase scene that wears you out just watching.And, as it's set in France, you get plenty of enthusiastic smoking, so if you are one of these Brits who have to brave the elements for your fag break, this film will fill you with nostalgia! It's brilliant-but is it art? Who cares? Vive les policiers!

15 out of 18 members found this review helpful.

French whodunnit - Tell No One review by JD

Some lurking incongruities such as why are there no insects at the lake in summer, how does this man suddenly become so athletically endowed and why doesn't he turn round in the final sequence. The ideas are however original, and the plot sufficiently full of whodunnit suspense to recommend this film.

2 out of 5 members found this review helpful.
Show more

Tell No One is a French language film based on the American novel by Harlan Coben that tells the story of a hospital paediatrician Alex, whose is knocked unconscious and thrown into a coma when he interrupts what appears to be the murder of his wife and childhood sweetheart, Margot.

Almost ten years after Margot’s case is closed new evidence surfaces that implicates Alex, meanwhile he has been receiving emails from someone with information only Margot could possibly know; Alex flees the police and must remain undetected whilst he solves this complex and intriguing case.

Such a brief synopsis does not do justice to the depth and intricacies of Tell No One, it is a tightly wound story, directed with a strength and assurance that knowingly points you in the wrong direction whilst quietly guiding you toward a resolution. Tell No One is a very intelligent mystery thriller, brilliantly cast with a wealth of (what at first can seem like too many) characters.

To ensure the complex storyline, numerous red herrings and multitude of characters does not prevent you from enjoying what is in fact a wonderful, tense and hugely satisfying thriller, you must be prepared to work. This is not a simple movie to follow or untangle and even the briefest moments of distraction are likely to make you loose the plot completely. If you are willing to meet the movie half way however you will surely be rewarded.