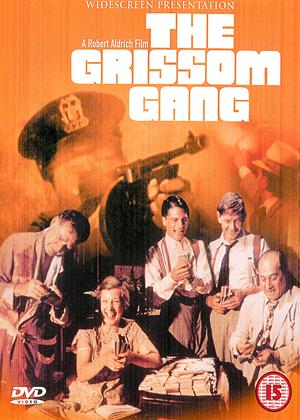 Reviews (1) of The Grissom Gang

Robert Aldrich is one of those directors who had an enormous influence on cinema as we know it today, and yet nobody talks about him very much any more, except as that guy who made "The Dirty Dozen". Which is unfair, because he was in many ways as important as we currently think Quentin Tarantino is, only he had most of the same ideas first, and he wasn't a horribly annoying self-obsessed kidult who will never grow up.

Unfortunately this isn't one of his best films. Aldrich was always most interested in characters covering the full gamut of villainy, from flawed heroes to irredeemable bastards ("The Dirty Dozen" is basically an excuse to put every stereotype he ever cared about in one movie, which is probably why it worked so well). Here we see his remake of "No Orchids For Miss Blandish", a novel which 70 years ago was the "American Psycho" of its day, only more so because we weren't used to that sort of thing yet. It's basically "Romeo and Juliet" mashed up with "The Texas Chainsaw Massacre" - a spoiled little rich girl ends up in the clutches of a mentally retarded psychopath, his viciously depraved mother, and the other thugs who comprise their "family". The twist is that the craziest of the crazies falls in love with her, and if she can fake liking him well enough, she'll stay alive long after they really ought to get rid of her. How far will she go to live? And what are the chances that she'll start to genuinely like him along the way?

This ought to be perfect Robert Aldrich material. Where he goes wrong is in giving us a cast of almost uniformly horrible people without the film noir stylization needed to render these awful characters bearable. Scott Wilson (who is not officially Ed Norton's dad, but there's such a resemblance that you have to wonder) is grotesquely repellent as the horrendous Slim Grissom, and Kim Darby panics efficiently and looks suitably spoiled as the damsel in distress, but by the time they begin to show real human feelings, it's too late for us to care very much. The few characters who actually have a heart are kept mostly on the sidelines, and in the end, although the whole thing is extremely well done in its way (apart from some of the acting - Ma Grissom in particular is basically the wicked witch who tried to eat Hansel and Gretel), it's all too unpleasant to be genuinely involving. In terms of the sheer volume of sweat on display, this is one of the sweatiest films you'll ever see, and that goes for every other aspect of it too.

In its own way it's kind of good, yet oddly uninvolving. To see Robert Aldrich putting the jigsaw together just right in a film about nasty, sleazy people getting it all horribly wrong in a strangely fascinating way, see that wondrous cult classic "Kiss Me Deadly". It's actually a lot nastier than this film, but at the same time, a lot more fun.