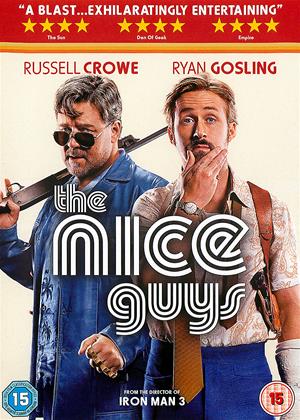 Reviews (9) of The Nice Guys

Tubby and Clyde - The Nice Guys review by NC

To be fair have never liked the Australian truck driver that is Crowe. Believe he probably not a nice person. He almost ruined Gladiator, as he was not only a poor actor, but whole persona was more car-park than arena. Kirk Douglas was small, but pulled it off with his dynamics.

Odd moments are quite well done, and Ryan's daughter (so to speak) is excellent. Will see more of her for sure. Ryan did his best and Crowe waddles through it as he now does.

Where to start with what's wrong with this movie?

- the sheer number of naff scenes that make you either cringe or want to throw something through your TV screen, including surely the most crass "assassination" ever in a film - sorry, there is nothing remotely funny about killing a defenceless young woman in cold blood

- Ryan Gosling's irritating character, or Russell Crowe's dead-man-walking performance, or the complete lack of chemistry between the two of them

I could go on and on, but you get the point. How on earth this got a 91% rating on Rotten Tomatoes is totally beyond me.

So, anything good to report? Yes, the winning and entirely film-stealing performance of Angourie Rice as Gosling's daughter; thank God for her, otherwise it would be a one star or even no star rating.

Surprisingly good film - The Nice Guys review by AS

A bit confused over the above poor reviews. Guess it's down to taste and expectations. My family and I enjoyed this very easy on the brain film. Never going to be a classic or win any Oscars but found some scenes very funny and was totally entertained over the entire movie. All down to taste, but really enjoyed this film.

It's a good, fun, buddy movie, set in the 70's. There is minimum topless nudity - it's not really a focus of the film. It's got some good scenes and laugh out loud moments.

Perhaps not a friday or saturday night movie, but watched this mid-week and enjoyed it.

Not a true classic, but I will watch it again when it is on free to air TV.

Dumb and Dumber - The Nice Guys review by BH

It's essentially Dumb and Dumber with better actors. That's not enough. It's funny in parts, and while Angouri Rice as a precocious 13-year-old is excellent, it's hard not to feel uncomfortable watching the scenarios in which she's placed. Watchable, but not essential viewing by any stretch of the imagination.

Well, I enjoyed it. - The Nice Guys review by ND

For goodness' sake, it's a film, not a code to live by. Lighten up, people.

We sat down and loved it. The little girl was excellent but all the acting was good enough and the plot both keeps your attention and can be followed.

When it comes on the telly I'll make sure I watch it.

Rent this film, it's well worth it.

Classified as a 'thriller', I found it anything but thrilling -just silly. It would have been more helpful to describe it as a 'comedy thriller', not that it was funny, either. It was certainly not at all my taste, though I note that it did appeal to some. I confess that I did not watch it all.

As some one suggested , could be improved while having a drink. Run of the mill comedy/drama which did not exhaust the detective in ones self. No Oscar performances but better than THE REVERANT which bored me to death with the 2 hour traumatic craw across the screen.

When the opening scene features a car crash that focusses on the naked breasts of the dead porn star driver, you know you’re in for a distasteful time. This oh-so-uncool movie even pokes fun at Richard Thomas’ (John-Boy in The Waltons) facial mole. The film is set in 1977 – cue an awful, funky, wah-wah soundtrack that makes it even more difficult to watch. It’s supposed to be a buddy action comedy in the Lethal Weapon tradition. To be fair, it does try to be funny. Boy, does it try. Ryan Gosling turns every reaction into a hamfest while man-mountain Russell Crowe, here auditioning for the title role in The Incredible Hulk, effortlessly ruins every one-liner he’s given. Not that the script gives them much to work with. It makes the remake of Starsky and Hutch look good.

Obviously there’s a dumbed-down market for this sort of tedium because it did well in the States, but you’d be wise to check out the trailer before sitting through the whole wince-inducing package. One star for the female cast, especially Angouri Rice as a precocious 13yo who steals scenes like a young Hayley Mills or Jodie Foster.

A comedy of wits, subversion and general stupidity, The Nice Guys is a thorough examination of clumsy characters acting in relation to bigger events than what they can ever comprehend. Here violence doesn’t come up out of nowhere, but rather knows its place among the story and it actually holds it together, which is to say so well-crafted that maybe becomes Shane Black’s finest feature till date.

Ryan Gosling and Russell Crowe appear together as a pulp-noir detective duo that feels long time overdue. Their chemistry drives this feature toward the inevitable, albeit subversive conclusion that leaves no one indifferent, except - for the irony to be even bigger – themselves. The two exchange banter like they’ve known each other for the whole of their lives, both on-screen and off of it. A simple glance is all that takes for the two to understand each other, without even uttering a single word. Now that that’s out of the way, let’s proceed further.

The other cast members perfectly add to the experience. Not only does Kim Basinger draw parallels between ‘L.A. Confidential’ and this one – she’s actually upgrading her character arc from the previous similar installment. Then there’s Matt Bomer, whose terrifyingly cold charisma will freeze the blood in your veins as soon as he steps on screen for the first time. Keith David really shines in his supportive role, while Angourie Rice tries and succeeds to impose onto the cop duo – only to outshine them when all three are being present together in a scene.

Now, actors can make or break a movie, but breaking a well-made script that’s polished to perfection is a tough job. Fortunately, all acting performances build upon the clever narrative Shane Black has presented, with direction and screenplay seamlessly molding into each other to produce the epic that is The Nice Guys. All subplots are there for a reason and by the end of it all – tie into the main plot on a cathartic note that both satisfies and enlightens, without it all seeming forced in the slightest.

The location is also worth mentioning for, since the L.A. setting presents a whole another level of fascination, with references that will mostly go over the head of everyone, and this is not a bad thing at all. The sole fact for them being there gives a unique perspective on how director Shane envisioned his piece to unravel at the big screen.

In totality, The Nice Guys succeeds on so many levels that it would be a real shame to not see it twice.