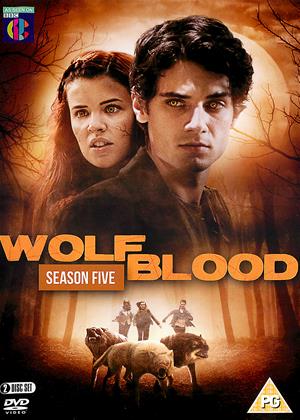 Wolfblood: Series 5 continues where the previous season left off, i.e. with Jana and her acquaintances spilling the beans and sharing their wolfblood secret with the rest of the world (or the rest of the community if you will). Granted, I went a little nostalgic for the earlier series following two pairs of characters, mainly Rhydian and Maddy (Bobby Lockwood and Aimee Kelly) and Shannon and Tom (played by Louisa Connolly-Burnham and Kedar Williams-Stirling respectively), however Leona Vaughan as Jana does a perfectly good job of replacing the previous actors when it comes to the main storyline; which is kind of neat for a BBC children’s production involving mythical creatures named wolfbloods.

As the story goes, suddenly Jana (Leona Vaughan), Matei (Jack Brett Anderson), Selina (Rukku Nahar), TJ (Louis Payne), and Imara (Michelle Gayle) find themselves at the forefront of the woolfbloods. Soon, everyone has a personal opinion about whether they did right and how their decision to open up would impact their lives over the long haul. On the other side of the spectrum, some humans are very excited about the news species being uncovered, while others are, quite immensely, scared to all hell and back. As tensions rise on both the human and the wolfblood side, it seems as if the future is slowly descending into an unknowable asset. Who knows what tomorrow will bring?

When it comes to technical specifics, Wolfblood: Series 5 keeps the production values up to par – which are maybe better than the first three series as well – and proceeds to deliver outstanding writing (again, for a children’s series), good pacing, great knowledge about suspense, mystery, intrigue, and drama, and a thorough understanding of editing and sound mixing both as is. When I come to better think of it, Wolfblood: Series 5 is actually better filmed than most adult-themed shows (the ones where they spill guts) in the States; again, Britain – 1, America – 0.

What else can be said about this series without spoiling all major plot points while doing so? Well, not much really. The only thing left to talk about is the acting, which is probably the weakest link out of all other aspects of the series. Granted, there are several outstanding performances (mostly credited to Rukku Nahar and Leona Vaughan), but the majority of the acting is simply passable to borderline mediocre. Which isn’t a bad thing at all, since the series is clearly aimed at the younger demographic and therefore it’s perfectly fine for them to enjoy, I guess. You know what – I think I’m getting old as is.

Finally, Wolfblood: Series 5 is great for your youngest, and this is where the series’ appeal both begins and ends as well.