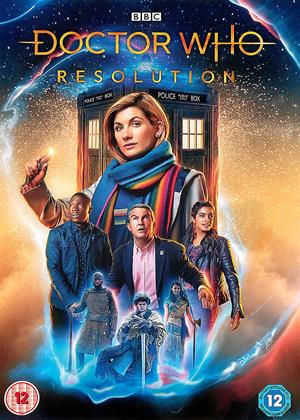 Reviews (1) of Doctor Who: Resolution

There's life in the old Doc yet. Spoilers! - Doctor Who: Resolution review by NP

After what might be described as a rather uneven debut series for Jodie Whittaker's 13th incarnation of The Doctor, 2018's New Year special proves that the show is still more than capable of delivering the goods. Concentrating on what it does best, Doctor Who's showrunner and head writer Chris Chibnall reintroduces us to the series's most fearsome monster. After vowing only to bring new villains and aliens to his first series, he has still shown a certain restraint here. The singular returnee is, by its very nature, a nuts-and-bolts affair - but still capable of causing a great deal of trouble. Not only a reintroduction, but a reminder of the power and scariness of the returning baddie. You all know what it is, but I ain't saying!

The cast are terrific. Jodie's Doctor is a bundle of nervous energy, Ryan (Tosin Cole) has his own story to tell, Graham (Bradley Walsh) provides the bedrock to it all, with some funny one-liners. And Yaz (Mandip Gill) - dear old Yaz - who has yet to be given anything really interesting to do, continues to be my favourite, primarily because I really want to know more about this likeable, loyal young police woman. Hopefully future Doctor Who can give us - and her - a really interesting story in her own right.

For now though, Doctor Who has reinvented itself as a slightly more intimate, less spectacular series. For the most part, this works, especially when something earth shattering does threaten to happen - as in 'Resolution.'