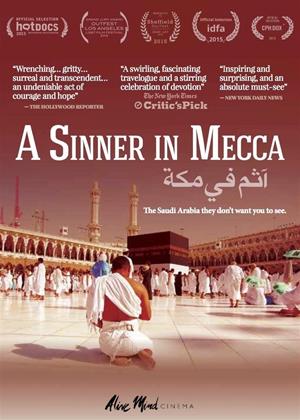 Synopsis:
For a gay filmmaker, filming in Saudi Arabia presents two serious challenges: filming is forbidden in the country and homosexuality is punishable by death. For filmmaker Parvez Sharma, however, these were risks he had to assume as he embarked on his Hajj pilgrimage, a journey considered the greatest accomplishment and aspiration within Islam, his religion. On his journey Parvez aims to look beyond 21st-century Islam’s crises of religious extremism, commercialism and sectarian battles. He brings back the story of the religion like it has never been told before, having endured the biggest jihad there is: the struggle with the self.
Directors:
Parvez Sharma
Writers:
Sajid Akbar, Alison Amron
Genres:
Documentary, Lesbian & Gay, Special Interest

Reviews of A Sinner in Mecca

A Sinner in Mecca review by Mark McPherson - Cinema Paradiso

Filmmaker Parvez Sharma has an interesting angle for his documentary A Sinner in Mecca. He’s a gay Muslim who married in New York and now sets out on his Mecca pilgrimage known as the Hajj. Parvez secretly documents his journey and describes the cultural importance of it all. It sounds unique given his sexuality that clashes with the current mindset of Islam. Unfortunately, Parvez’s homosexuality as a factor in his journey remains more hidden than his cameras.

Obviously, Parvez isn’t just going to parade around Saudi Arabia introducing himself as a gay Muslim to see what others think. The opening intro features Parvez discussing with a friend via email about being gay in the Muslim world is like hell, relating to a public execution of one such individual. Even for this film addressing the subject of homosexuality has made the Iranian Jahan news denounce it as an attack on Islam. He keeps most of his examinations at home - starting the movie slow with his comfy lifestyle in America. Free to be both Muslim and homosexual, he still feels the need to continue the tradition of the Hajj for spiritual fulfillment.

While Parvez does observe some aspects of his sexuality in contrast, he mostly keeps the perspective low as his film focusses more on the pilgrimage itself more than anything. I was hoping for more of an examination, but this approach does help bring a more personal and spiritual aspect. Parvez lets us experience everything that he witnesses while completing his Hajj. From the political propaganda of the region to the long trek straight into the symbolic mouth of Satan, every aspect of this experience is covered. Parvez even provides some interesting commentary on how much of the Hajj has become domesticated with air conditioned halls for hiking and a Starbucks attached to religious landmarks. It’s a sight that asks plenty of questions about what place the religion holds in the modern world.

But these are bigger questions that are merely touched on during the Hajj, seen through the documentary as more of a personal account than an in-depth commentary. The question is asked if a homosexual can continue to be Muslim in this new world of religious unrest and violence. He digs deep within Islam trying to make sense of its history and teachings to find his place. By the original rules and beliefs, he may have fit in just right with the religion. But by the current standards of what he believes is a bastardized version, he is an infidel. How can this change? Can it change? These are questions that are never answered as there is too much reflection and concentration going into the Hajj.

A Sinner in Mecca asks an awful lot of big questions, but doesn’t answer much of them. I’m guessing that Parvez was hoping to find something a little deeper and more telling on his Hajj, but he may have turned up with less than he thought he could capture. The Hajj itself proceeds normally without interruption. He stops a few patrons to ask what they think about all the garbage that results from the pilgrimage. Most of them remark that it’s just the way things are. Will Islam continue to exist just the way as it is or will it ever evolve past kicking and screaming into the new world? Another question left for a bigger documentary. Don’t get me wrong - Parvez’s journey is certainly a unique one worth capturing. It just doesn’t match the scope that I’m sure he was aiming for.