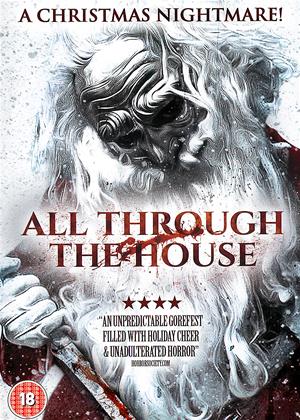 Reviews of All Through the House

All Through the House is a badly-acted c-class slasher/horror flick that is easily forgettable and mind-numbingly clichéd. This time, the killer is dressed up in Santa’s clothes and is terrifying, or at least that’s what director Todd Nunes wants us to believe. Yay. But in all honesty: humanity could’ve probably survived if All Through the House was never being made.

The film (tries to) is proudly and without precedence looking at the 80’s slasher genre while ticking all boxes that made those movies work. However, the film also falters when it comes to reinventing conventions, and honestly: who wants to see the same thing over and over again? (HINT: not me)

And then there’s the story: a juvenile couple whose only goal in life is to explore sex as much as possible during all times, gets a visit by a crazed, creepy madman dressed in Santa garments with the only desire to kill unsuspecting home-dwellers. All mentioned above happens during the festivities of Christmas in Napa, California.

However, the killer’s wrongdoings get interrupted by a girl returning home from college named, in the most American fashion ever: Rachel Kimmel (played by Ashley Mary Nunes). As all girls do, her first and foremost desire is to go on a Christmas shopping spree in her hometown, with the help of her girlfriends Sarah (Danica Riner) and Gia (Natalie Montera). Soon, things turn for the worse as we see how their equally-crazed neighbor - Ms. Garrett – puts on a show by substituting her missing husband and daughter with, wait for it – mannequins of all shapes and sizes.

Yup, nothing fishy going on there.

Furthermore, as fake blood splatters all over, well, everything – we come to learn that our killer the Santa uglyface has a strange inclination to the male reproductive organ. Or rather its dislodging from the human body is what his killing fetishes are all about. To not spoil a great moment for the whole family to enjoy – watch out for a certain bag somewhere along the middle in the flick.

All through the House?? feels lazy and artificial; lazy as in screenwriting lazy; artificial as in “Hey baby, are you feeling frisky?” with a ‘YES’ for an answer. You could’ve been less obvious, and still reach the same effect as what followed after that deep exchange of sexual pleasantries between a buff dude and an always-sex-ready chick.

Proceed at your own peril.