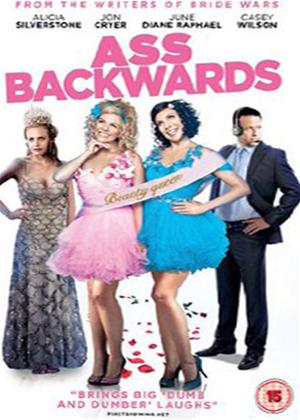 Not released
Cool and the Crazy

Not released
The First Turn On

Movies like Ass Backwards really do make me feel like I’ve fallen into the Twilight Zone. In the first 20 seconds, I witnessed the two female leads urinating on a public sidewalk. In the next 30 seconds, I watched them hand a coupon to a homeless person feeling they did some good for the world. In the next 40 seconds, I pinched myself to see if this wasn’t a nightmare and was sadly let down. I do indeed live in a reality where road trip movies have sunk as low as the humor-drained presentation that is Ass Backwards.

Two airheaded roommates Kate (June Diane Raphael) and Chloe (Casey Wilson) find themselves drawn back to their hometown to finally win the beauty pageant they lost as children. What brings this on is a newly revived hatred of the pageant winner they lost to who is now a successful author. Angered at how their lives turned out lesser as a poor egg donor and dancer, they decide to return for an anniversary pageant and win it as some sort of self esteem boost. And what follows is a slew of a-typical road trip movie moments. They’re taken in by a lesbian commune that promptly kicks them out for misinterpreting their sexual advances. They enter a strip club where they perform some ridiculous stage moves for money. That, in turn, leads to the mandatory jail scene.

At first, I felt very removed from this picture. It seemed like nothing more than your standard road trip comedy with very flat gags. As I continued to set my watch for the expected cliches, things took a very strange turn in the second act. After Kate and Chloe make it out of holding, they reconnect with their old pal turned sex abuser Bryan. They meet up at his house and find him smoking crystal meth because he finds himself a loser. Sharing a similar opinion of themselves, the girls take part in the recreation as well. They seem almost completely unaffected by the drug as opposed to Brian who has all sorts of problems. I can only assume that the brains of these two ladies are so far gone they’ve some how built up an immunity. You can’t kill brain cells if none exist in your head. That’s the only reasoning I could find behind these two ladies smoking meth and still being able to sing and dance.

One would figure that by this point the movie has gone full-on crazy with its comedy as if anything can happen and will. But then it decides to take the sentimental route in which the two inevitably have to split and come together once again when they converge at the pageant. All their riffing and bitterness for the competitive nature of beauty is slowly pushed aside. But then, as if the movie were awaking from a comedy coma, it decides to pull off one lousy capper joke that somehow makes everything transmutates into a happy ending. This is a movie with severe mood swings resulting in comedy that is both tired and confusing.

Written by the stars June Diane Raphael and Casey Wilson, I can’t help but feel that Ass Backwards was trying to be a female version of Dumb and Dumber. But the humor of that film came from the characters being naturally oblivious to the world around them yet they still have genuine heart. In Ass Backwards, this airhead duo seems toxically cognizant. They’re driven by revenge, encourage drug abusers and are just violent cry-babies. Very little of any of their idiocies feel like they warrant any heart or good intentions. The other issue is that there is no straight man in this film. Every character is trying to appear off and kooky as they match IQs with our protagonists. There is never a moment where anyone sits these girls down to tell them that beauty pageants do not matter and that they’re wasting their time with this journey. Without any connection to reality, there is no ground to any of this lunacy or cruelty.

June Diane Raphael and Casey Wilson do have some great comic timing between them, but they simply cannot write jokes good enough for characters this vile. This is a script that feels as if it were fished out of a dumpster of rejected plots for Two Broke Girls. It’s a movie not interested in creating real or likable characters as much as it wants to throw as many half-thought gags at the screen until something sticks. If all else fails, just go for the easy low-brow with bodily functions. You know a film has run out of gas when the last shot involves more public urination.