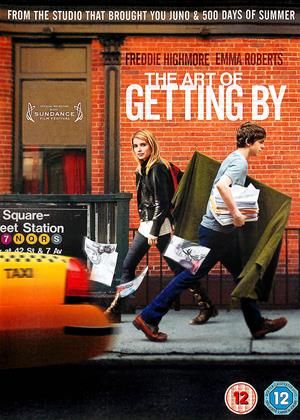 Rent other films like The Art of Getting By

Reviews of The Art of Getting By

The Art of Getting By review by Melissa Orcine - Cinema Paradiso

In New York City, a senior prep high school student named George is either bored or depressed. He finds homework revolting, he’s hyper-literate but pretends not to have read what’s being taught, and though a great artist, he’s uninspired, a sulking who over-thinks. Freddie Highmore is George in ‘The Art of Getting By’, the film feature debut of writer-director Gavin Wiesen.

‘The Art of Getting By’ is a coming-of-age story, clear enough. But being that George and his cohorts live in privilege, it’s perplexing to say the least why his melancholy occupies most of his time. His mother (Rita Wilson) and father (Sam Robards) are not exactly bad parents; in fact, there is nary a dysfunction in sight. And yet George marinates in his delicious misery.

Up until he meets a young artist (Michael Arangano) do we realize he can connect with people, especially when he finds himself infatuated with Sally (Emma Roberts), a level-headed senior without his angst. Could it be that George is just play-acting being a misanthrope to attract chicks? Or is he just as dull as he claims to be?

As a first film effort, writer-director Gavin Wiesen pays homage to 1980’s John Hughes but with smatterings of contemporary Wes Anderson. Unfortunately, it doesn’t work. Hughes set his teen angst movies in suburbia, sometimes even the wrong side of the tracks, but Anderson is Upper West Side sensibility through and through. ‘The Art of Getting By’ is the lovechild of Hughes’ and Anderson’s films, but then, it comes out trying too hard. We can let Gavin Wiesen off the hook since this is his first feature. Here’s to hoping he gets more creative on his next effort.

Freddie Highmore as George seems to be confused how to play him and it shows. The audience will deem him unlikeable. Kudos to Emma Roberts for a solid performance as muse and with Highmore, they’re sweet. But ‘The Art of Getting By’ couldn’t coast on sweet alone.